In observance of Global Tiger Day on July 29, the Association of Zoos and Aquariums (AZA), World Wildlife Fund (WWF), World Association of Zoos and Aquariums (WAZA) and the Wildlife Conservation Society (WCS) are reiterating a joint commitment to ending tiger farms that threaten the future of these endangered cats. The organizations today released a joint statement urging countries with tiger farms to immediately ban all trade in tiger parts, end tiger breeding for commercial purposes and phase out tiger farms. 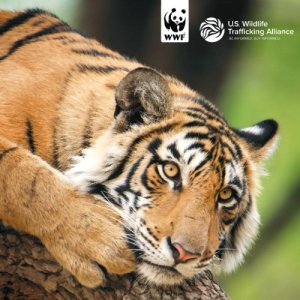 The illegal wildlife trade is one of the greatest threats to tigers due to the demand for their fur, bones, meat, and other body parts. Tiger “farms”—where tigers and other exotic animals are bred solely for entertainment or to be sold for their body parts—often fuel wildlife trafficking and undermine efforts to protect and recover wild tiger populations. Tiger “farms” have no role to play in wild tiger conservation and should not be confused with facilities that conduct conservation breeding programs.

The U.S. Wildlife Trafficking Alliance, a program of AZA, is working through public-private partnerships to combat the illegal trade of wildlife, including tigers. AZA zoos and aquariums have been joined by more than 50 nonprofits and leading companies to form a powerful coalition to raise awareness, reduce demand, and to share best practices in order to close global markets to the illegal trade of wildlife and wildlife products.

“Unlike AZA-accredited zoos that have achieved the highest quality standards for animal care, welfare, and conservation; ‘tiger farms’ imperil the animals at their facilities and in the wild,” said AZA President and CEO Dan Ashe. “These farms weaken legitimate conservation efforts to protect tigers by engaging in unsustainable breeding practices and facilitating illegal trade of tigers and tiger products. Banning trade in tiger parts, ending commercial breeding and phasing out tiger farms are strong steps countries with tiger farms can, and should, take today.”

Tiger populations are further threatened by habitat loss and degradation, poaching, tiger-human conflict, loss of prey, and other factors. Tigers are thought to occupy less than seven percent of their original range. Four of nine subspecies have disappeared from the wild just in the past 100 years, and the Amur, Sumatran, and Malayan tigers are all thought to number fewer than 500 individuals in the wild. It is now estimated that less than 3,900 tigers remain in the wild, worldwide.

This Global Tiger Day, AZA is also encouraging members of the public to get involved in tiger conservation by supporting the “Vanishing Species” postal stamp to benefit the Multinational Species Conservation Fund (MSCF). Proceeds from sales of the stamp support public-private partnerships that conserve tigers and other species in their native habitats. Through the MSCF programs, the United States supplements the efforts of developing countries to sustain wildlife populations, address threats such as illegal poaching, reduce human-wildlife conflict, and protect essential habitat.

More information about the Tiger Conservation Campaign, and the projects it supports, can be found on this website.

The full joint statement issued by AZA, WWF, WAZA, and WCS can be found online here.