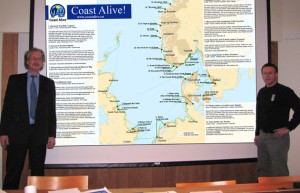 On March 16 at their Annual Meeting in Varberg, Sweden, IAT partner Coast Alive officially designated more than 10,000 kms (6,000 miles) of North Sea Trail and North Sea Cycle Route as part of the International Appalachian Trail. The new IAT route will cross much of Norway, Sweden, Denmark, the Netherlands, and England, and often follow the North Sea coastline.

In addition to meetings and presentations, the well-planned event included guided dinner tours of a sheep farm with gift shop and restaurant, and the nearby Varberg Castle.

Coast Alive is a project of the Interreg North Sea Region Programme, which is funded by the European Regional Development Fund.