¡Una Fuerza! is a movement that started in Campo Grande, Mato Grosso do Sul, Brazil during the first AdventureNEXT Latin America event organized by the Adventure Travel Trade Association (ATTA) in 2018. Regional collaboration was the vision behind this movement. We dreamed about destinations in Latin America really sharing ideas, solutions, and successful case studies for a more sustainable travel approach to the tourism industry in the region.

Our region has many particularities but how we approach the similar challenges we all face makes us deeply connected. We are more alike than we are different. This feeling was very tangible during the recent AdventureNEXT Latin America – Panama 2022 event, held 5-7 February 2022 with the theme “Climate, Community, Connection.” 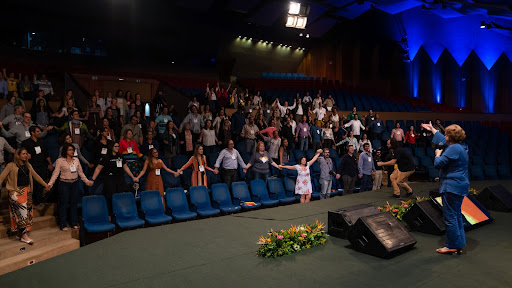 This year’s event in Panama AdventureNEXT Latin America was supported by local stakeholders like Promtur, Autoridad de Turismo de Panamá, Camtur, APTSO, and ExpoEventos Panama. The event also involved international buyers and media, destination representatives, suppliers from throughout the region, community leaders, young entrepreneurs, and artists; all had the opportunity to share their experiences, knowledge, and smiles.

Before the conference started, all international hosted delegates (buyers and media) went to the south-eastern tip of the Azuero Peninsula on Panama’s Pacific coast. There, they participated in a traditional “Junta de Embarra,” an old tradition where members of a community work together to build a house for a new family. The day before the international delegates showed up, the local community built the framework of the house, and the next day the locals and the international delegates mixed soil, straw, and water together. These tasks were carried out barefoot, accompanied with shouts, shanties, fireworks, and some seco, which is the national liquor of Panama made of sugar cane. This testimonial of an international delegate says it all, “The highlight for sure was the Junta de Embarra in Pedasi! Loved mixing (singing/working/drinking) with the locals of all ages..“ 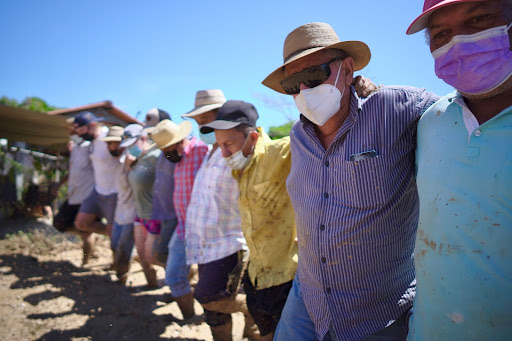 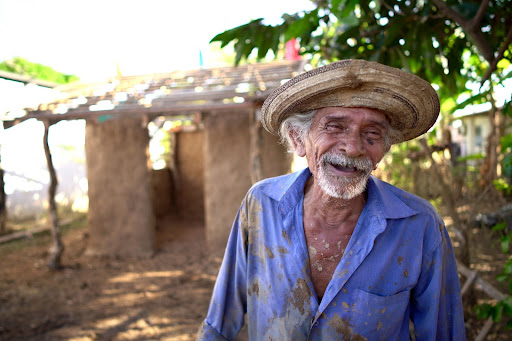 The house we were building together is in the back behind a leader from the community.
Photo: @ATTA / Daniel Santos

The idea of collaboration had already come to life before the event and continued throughout. During the first afternoon of AdventureNEXT, leaders of sustainable and adventure travel associations from Latin America (APTAE, AMTAVE, ACOTUR, ABETA) met in person and virtually (more details about this meeting are in this article). Of the topics discussed, there was a focus on how to create a common strategy for the region. The event was the catalyst for discussion, but these meetings will continue virtually and in-person at future ATTA events.

There were many other moments for brainstorming and networking during the event, for example the Adventure Accelerators, which were round table discussions around themes like “Working with Communities” and “Safety in Adventure Travel.” These sessions thrived on engagement and created a safe environment to share solutions and ideas. And of course, the marketplace, where buyers, suppliers, and media could have pre-scheduled business meetings, but beyond the event program, people were always sharing and talking during the meals and evening gatherings.

ATTA CEO Shannon Stowell and myself, Regional Director, Latin America & Caribbean, helped facilitate a roundtable discussion with a high-level group of governmental tourism leaders from around the continent. The group included Minister of Tourism of Panamá, Iván Eskildsen and other leaders from Panama (Fernando Fondevila), Colombia (Ricardo Galindo Bueno), Costa Rica (Gustavo Alvarado), Ecuador (Niels Olsen), Guatemala (Alejandro De León), Honduras (Luis Guillermo Chévez Contreras), Mato Grosso do Sul- Brazil (Bruno Wendling) and Jordan (Malia Asfour, representing her country and the ATTA’s Board). A declaration entitled Transformation Towards The Tourism of the Future was signed by all, stating their commitment toward a more sustainable and transformative future for tourism.

In the evening, during the opening cocktail, the delegates got a taste of the amazing Embera cuisine and learned more about their culture, through music, body painting, handcrafts, and deep conversations. We also got to meet and learn about the 11 leaders of other Panamanian indigenous communities, who came from all over the country to participate in the event. We were blown away by the diversity of stories and amazing projects they do in their areas of Panama. 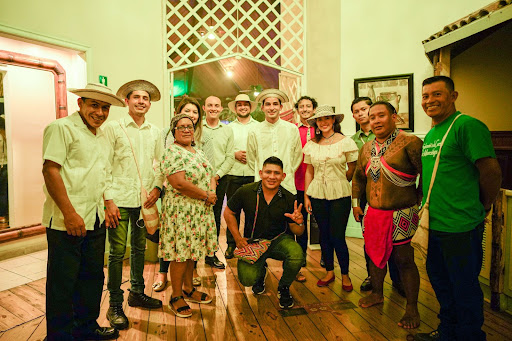 The next morning, we started by listening to Jorge Rivas Moller, the Director of REGENERA NGO, from Chile and Nilka Sánches, who is a community leader of the Nasso ethnic group in Panama. They had an honest conversation about what it means for communities to open their homes and hearts to tourists, and how the travel industry can support and work with them in a respectful way. We left this session inspired to listen, respect, build, and love more. It was a very powerful and emotional start to the event.

In the afternoon, we had a presentation from Jorge Perez, owner of Tierra del Volcan in Ecuador and Maria Floridalma López Atz, a 19-year-old environmental and Human Rights Activist from Guatemala. They both brought us hope and encouragement to keep doing good work, one step at a time, in the fight against climate change and the impact it has on local communities. We left with concrete tools, ideas and the feeling that every action matters when you are doing the right things.

During the last day of the event, we learned about Tourism-Conservation-Research (TCR), a model developed in Panama, and how the implementation of this model is empowering communities in Panama’s heritage sites. At our closing keynote, we talked about how we foster connections that elevate living culture, regenerate ecosystems, and create sustainable and equitable economic opportunities through food and music. Amazing Panamanian musician Enrique Chi, the lead Singer & Songwriter of the Making Movies band and chef Joseph Archbold at Receta Michilá restaurant in Bocas del Toro, shared the stage with Jim Kane, the Director of Corporate Social Responsibility for Exito Travel, Founder/Director of Culture Xplorers. They all made us think deeper, sing, taste, clap, and leave inspired by how to incorporate all senses into our travel itineraries. 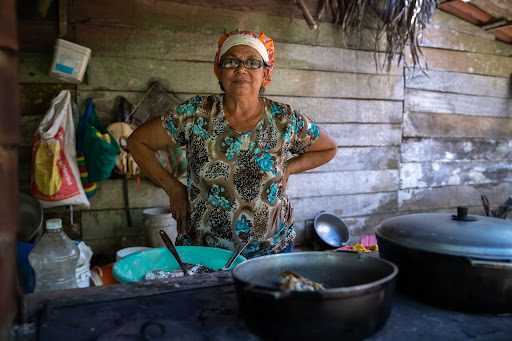 One of the most powerful, educational and inspirational aspects of the event was the screening of amazing films brought by InkaFest – Mountain Film Festival. The film featured stories of explorers, destinations affected by climate change, and communities around the world.

When asked, “What three key initiatives will you take action on as a result of attending this year’s AdventureNEXT?”, one of the delegates mentioned:

“1. Community – Developing deeper relationships with the communities of the destinations we sell and understanding how to support them better. Facilitating open communication and mutual learning.   2. Climate – Encouraging our clients to be conscientious travelers, to understand how our decisions can have an impact both locally and globally. Embracing the regenerative mindset.  3. Connection – Providing experiences for our travelers that involve all the senses, thus allowing for a deeper understanding of the destination. Fostering genuine appreciation and respect through art, music, food, and hands-on activities.” 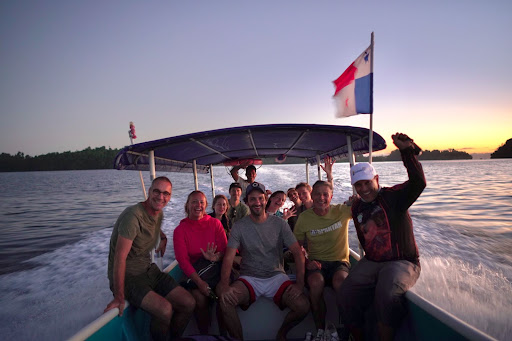 Pre Adventure 1 – Coiba & Azuero. “From the most Terrible Prison … to the Cradle of Folklore”
Photo: @ ATTA / Daniel Santos

There were zero COVID-19 cases detected during or after AdventureNEXT Latin America – Panama. This success by itself brings hope to our industry which is in desperate need of restarting. Being together in person is what truly helps the real connections to happen. As one hosted buyer said, “My best experience at AdventureNEXT Latin America was the networking with local operators and others around the world, especially the one in the same pre-tour. Those days bring you a connection which makes you become friends and do business.”

With this, I am confident to say that WE, all together–the delegates, communities, Panama stakeholders, speakers, and event team–accomplished our goals of “Una Fuerza” during this year’s event. I am really looking forward to continuing this conversation in future events and of course at AdventureNEXT Latin America – Bogota, in March 2023. It’s time to re-gather ourselves, shake off the troubles brought by COVID-19, and move forward! ¡Una Fuerza!

1 Comment to Climate, Community, Connection Thrives Through the Una Fuerza Movement in Panama