Daily headlines in newspapers around the world. Alarming studies and projections regarding melting glaciers and rising sea levels. A drastic loss of biodiversity. Chaotic weather with record seasonal extremes. Public protests of unprecedented size in the streets of the world’s major cities.

After long decades of alarm and frustration from the scientific community, the climate crisis has finally taken the global center stage with a late-coming urgency now impossible to ignore. 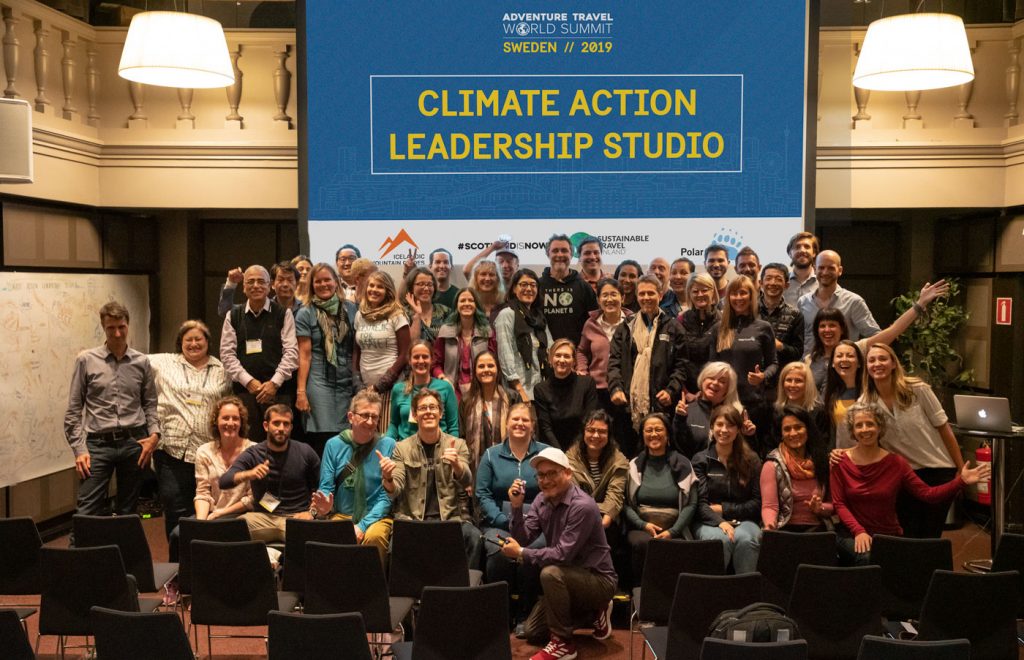 At this year’s Adventure Travel World Summit, the Adventure Travel Trade Association (ATTA) offered an additional day of learning on Friday, 20 September, at the Climate Action Leadership Studio so that interested delegates and travel community members could gather and discuss the very real issue of travel’s role related to climate change.

Gothenburg, Sweden, was a fitting location for the event. The Swedish culture maintains a deep connection with nature and its preservation. It encourages communion with the unbuilt world, often leading the way by using renewable energy sources, producing low carbon dioxide emissions, and initiating social and governmental policies that support such efforts. Indeed, outspoken Swedish youth climate activist Greta Thunburg has become a national hero, and flygskam (flight shame) has entered both the local and global vernacular.

During the day-long studio, delegates put climate change in context and envisioned practical strategies and operational steps they can take immediately to reduce their climate impact. Information-rich presentations on visionary carbon removal technology and practical carbon offsetting demystified the science and practice behind both. Steven Goodman of Climeworks, a leading innovator in bringing carbon removal technology to the private and public sectors, described carbon pollution as “leaving trash in the air.”

“To avoid climate breakdown and remain within planetary boundaries, we will have to take a huge amount of carbon from the air,” Goodman said. “Scientists have calculated that we will need to remove 5 to 10 billion tons each year.” This will need to be accomplished through a variety of means, including direct air capture, a process that entails pumping captured carbon dioxide from the air into basaltic rock beneath the Earth’s surface, which binds to the carbon dioxide. In effect, the carbon dioxide, which originated in the ground in the form of fossil oil and gas, is put back into the ground to become solid carbonite. With a vision to remove 8% of carbon dioxide emissions – tourism’s share – ATTA is launching Tomorrow’s Air, a collective of travelers and travel businesses who will combine their efforts to support the vision.

Eric Balian, managing director of tour operator Terres d’Aventure, shared his long journey to offsetting 100% of his clients’ carbon dioxide footprint. Starting his efforts a full 15 years ago, Balian said he had no idea what he was doing at the time. In a survey of his customers, 95% said they were ready to make a change to mitigate their individual impact. Yet not one of them voluntarily offset their emissions. “The process was too complex,” Balian said. “So we just decided to do it for them.”

Emphasizing the importance of offsetting not as a marketing boost but because it was the right thing to do, he described the starts and stops his company encountered as it learned how to ensure its offsetting projects were measurable, verifiable, permanent, and had a strong social and economic impact. “Don’t be more Catholic than the pope,” he advised. “It’s not possible to be perfect in your calculations, but you cannot wait to act.”

Other presentations addressed how to tailor trips to reduce impact by offering choices such as “meatless expeditions,” train tours, tours offered in the off season, and longer stays when a long-haul trip was inevitable.

Another poignant topic of the Studio touched on communicating sustainability efforts to customers in a meaningful way. Leslie Bruce, president and CEO of Banff & Lake Louise Tourism, shared her experience of promoting public versus private transport in the Canadian national park. While personal convenience bested environmental concern in her testing of messaging, the result was what mattered: Traffic in the park dropped dramatically.

Richard Bangs and Pete Bryant of Steller.co described their mobile storytelling platform’s potential to share concerns and successes with a broad community. “We learn through stories,” said Bangs, a veteran explorer often called the father of adventure travel. “Travel is the original narrative. It has an arc to it.” In a world where the climate crisis is a hot topic, there is an opportunity to use platforms like Steller to create awareness, ask questions, and engage in conversation.

At the close of the studio, ATTA president Casey Hanisko pointed to the role and responsibility the adventure travel industry has in the future. She also emphasized the huge potential the industry has not only for addressing the issues we currently know about but using imagination, collaboration, and transparency to navigate a better way forward. Echoing the urgency of the day’s events, Goodman noted succinctly: “There’s so much we don’t know yet, but we must do what we can with what we do know now.”

The 2019 Adventure Travel World Summit in Gothenburg, Sweden, was entirely carbon neutral, thanks in large part to our official sustainability and carbon neutral partner, Airbnb, which helped carbon offset all ATTA travel to and from the event. Soon, the ATTA will be offsetting with South Pole through its new program Neutral Together. Open to all ATTA members, Neutral Together will offer participants the opportunity to aggregate their emissions volume and receive a lower per ton price. For more information, please email [email protected].