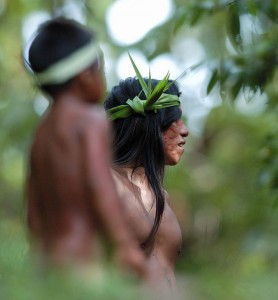 Seismic explorations planned by Chinese Oil Company Sinopec have led the Ecuadorian eco-tourism company, Tropic, to close the internationally recognized and award-winning Huaorani Ecolodge, a community tourism program operated in conjunction with the Huaorani people on the fringes of Yasuní National Park.

Tropic Ecuador will halt until further notice welcoming guests to the Huaorani Ecolodge at the headwaters of the Amazon in Yasuni National Park in Ecuador.

The announcement was made this week by Jascivan Carvalho, director of Tropic Ecuador, a National Geographic award-winning ecotourism company based in Quito.

Since 1994, Tropic has led tours through the country’s most engaging landscapes including into the rainforest region occupied by the Huaorani who, since 2008 with partner Tropic, have worked to stabilize a heretofore ecologically threatened region of the Ecuadorian Amazon, considered one of the world’s most biologically diverse.

Planned seismic explorations for oil are scheduled to take place virtually atop a landscape that for millennia has been home to the Huaorani who only in the middle of the last century were introduced to civilization beyond the rainforest. The Chinese oil company Sinopec, contracted by the Ecuadorian state oil company Petroamazonas, is carrying out seismic exploration in Block 21 within the Huaorani territory where the Lodge is located.

“Unknown to Tropic, until recently, Sinopec has been conducting negotiations with the Huaorani communities located within the area,” said Carvalho. “What we offer these people through our joint ecotourism effort is a way for them to stay on their tribal land without sacrificing a livelihood. We suspect that what the oil interests offer them can only be hard cash that is here today, gone tomorrow and that does little in the long term to secure a sustainable life.”

Over the years the lodge, owned by the Huaoranii communities, has provided work for approximately 90 people while supporting an additional 250 family and community members. It was established on the principle that sustainable, environmentally friendly alternatives to oil and other extractive projects can be profitable for local communities, offer young Huaorani people an alternative to migration and bring in much need foreign exchange to a dollarized economy.

Carvalho noted that a purported mission of Ecuador’s government has been to further sustainable tourism which brings visitors into indigenous communities such as those of the Huaorani communities in the Amazon.

“However, another apparently more powerful mandate is to harvest oil and in this case, in this community, this mandate is overriding sustainable tourism,” he said. “We are shocked by the lack of communication and by the cavalier attitude of Sinopec who have divided this community and turned people against each other – and against us. The Ministry of Environment approval of the testing will also send a clear message that ecotourism as a sustainable alternative is simply not being given the support it needs to flourish and to benefit indigenous communities in Ecuador.“

The news that the lodge will close, for at least some time, comes on the heels of accolades from National Geographic that singled out this community project to receive a World Legacy Award for Engaging Communities (promoting benefits that directly improve local livelihoods).

While the clock is ticking before explosives are set, Carvalho said he has requested a response from the government regarding what may be done at the 11th hour.

“The Chinese are in and will stay until the job is finished which could be another six months. Right now because of oil-related activities it is dangerous and aesthetically unrewarding to our guests to bring them to his region,” he added.

The region encompasses Yasuni National Park, a UNESCO Biosphere Reserve that is home to as-yet uncontacted indigenous tribes, including the Tagaeri and the Taromenane. The particular interest these ancient people now show toward their ancestral land here has encouraged natural reforestation along waterways and in turn ever-more-frequent sightings of wildlife whose habitat is no longer being suppressed. Amphibian (121 documented species), fish (382 known species), bird (596 known species), bat (117 species estimated) and insects (over 100,000 different species) abound here in numbers not found elsewhere on Earth thanks to a diverse and richly textured flora and fauna (up to 720 estimated endemic species and over 4,000 species of vascular plants). Species of vertebrates number 43.

In 2008 Tropic assisted the Huaorani with the formation of a five-community tourism affiliation to help secure the tribe’s health and heritage through the tools of sustainable tourism. Members of this tribe were trained to work at the award-winning, five-cabin Amazon rainforest lodge that they built of traditional materials harvested from Yasuni National Park. They are also learning how to produce and sell crafts. Produce is bought locally.