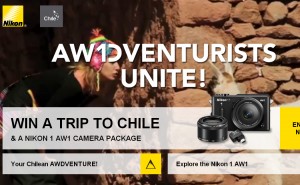 With the objective of promoting Chile through prestigious international brands, Chile has formed an association with Nikon and launched a sweepstake in the United States, whose prize is a trip to Chile and the new Nikon AW1 camera.

The contest, which ends on January 20th, is directed exclusively at the U.S. market, and will run through the http://www.awdventure.com/ platform, where, in addition to sweepstake details, images and videos of Chile are on show. The winner will receive a trip to Chilean Patagonia for up to four people, a couple and two children.

The Under Secretary for Tourism, Daniel Pardo, stressed the importance of this innovative campaign. “The United States is in fifth place in the countries of origin of tourists to Chile. In 2012, 178,852 Americans visited Chile, staying on average for 14.6 nights. This market brought in a total of USD $208,466,302 in foreign currency, “said Pardo.

Andrea Wolleter, General Manager of Turismo Chile, stressed that “this action is part of a new strategy we are promoting that is called brand partnership or co-branding, which involves a cooperative alliance between Chile and prestigious international brands in order to enhance our destination.”

This activity is part of the promotional activities that SERNATUR, in conjunction with Turismo Chile, are performing in the U.S. market. During this year there have been cooperative campaigns in prestigious online and offline media, such as Afar and Backpacker magazine, participation in exhibitions such as Sea Trade and Virtuoso Week, and a major familiarization trip called “Chile Adventure Week“, which was held in conjunction with the major association of adventure tourism in the world, ATTA (Adventure Travel Trade Association).