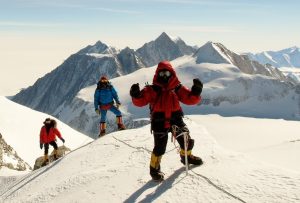 Despite the AAME’s incredibly successful expedition, Antarctica’s highest peaks would remain out of reach for private mountaineers until the 1980s. In the early days of Antarctic tourism, private travelers could only reach the continent by ship due to the formidable challenges of flying into the interior. In 1983, Dick Bass and Frank Wells persuaded the experienced polar pilot Giles Kershaw to fly them to Mount Vinson as part of their Seven Summits quest. The success of this expedition led Canadian mountaineers Pat Morrow and Martyn Williams to join forces with Kershaw in 1986 to repeat the feat, looking to be the first to scale the Seven Summits according to the more difficult Messner List. After reaching the summit, the trio realized the strategy they had developed to reach Mount Vinson could be used to assist other mountaineers and Adventure Network International (ANI), the predecessor to Antarctic Logistics & Expeditions (ALE), was subsequently born. 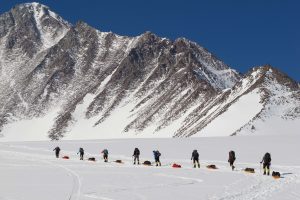 Now 50 years after the mountain’s first ascent, ALE continues the tradition by supporting over 130 climbers on Mount Vinson this season. ALE offers full-service guided packages to climbers as well as providing flight logistics and base camp services to guide companies. For the 50th anniversary, ALE released a commemorative graphic, available on t-shirts and patches that are exclusively sold in Antarctica. Guests on ALE guided Vinson climbs will also receive a commemorative backpack. The second of five departures is underway this week and will culminate on the 50th anniversary of Mount Vinson’s first ascent:

In addition to its regular Mount Vinson season, ALE is supporting several projects that celebrate the pioneering spirit of the 1966 AAME and hope to inspire generations of Antarctic mountaineers to come.

First, ALE will lead a small team of climbers on an attempt of a new route on the east side of Mount Vinson. This aspect of the mountain is largely untouched and the climbers are excited by the prospect of discovering new terrain.

Later in January, ALE will lead the first guided expedition to Mount Tyree, Antarctica’s second highest peak at 15,919 ft (4852 m). January 4, 2017 marks the 50th anniversary of Tyree’s first ascent but it has only been summited on five occasions, by a total of ten people, as it presents an extremely difficult climb by any route.

Last but not least, ALE will embark on its third expedition to Mount Sidley, Antarctica’s highest volcano at 14,058 ft (4285 m).