The climate crisis is a universal issue, one that is impacting the travel industry in a very tangible way right now. As the United Nations World Tourism Organization (UNTWO) notes, threats to the industry from climate change include “direct and indirect impacts such as more extreme weather events, increasing insurance costs and safety concerns, water shortages, biodiversity loss, and damage to assets and attractions at destinations, among others.” Travel industry stakeholders both large and small are mobilizing for action, banding together to lobby for carbon pricing, encourage responsible flying, and fund climate-smart agriculture, agroforestry, and conservation projects, among other initiatives.

Recognizing the urgency of the climate situation, the Adventure Travel Trade Association’s (ATTA) first Climate Action Leadership Studio, sponsored by Icelandic Mountain Guides and Visit Finland on 20 September 2019, will unite a global community of climate scientists, travel company leaders, and policymakers from some of the world’s most environmentally progressive travel destinations to explore practical climate action strategies for destinations and tour operators. 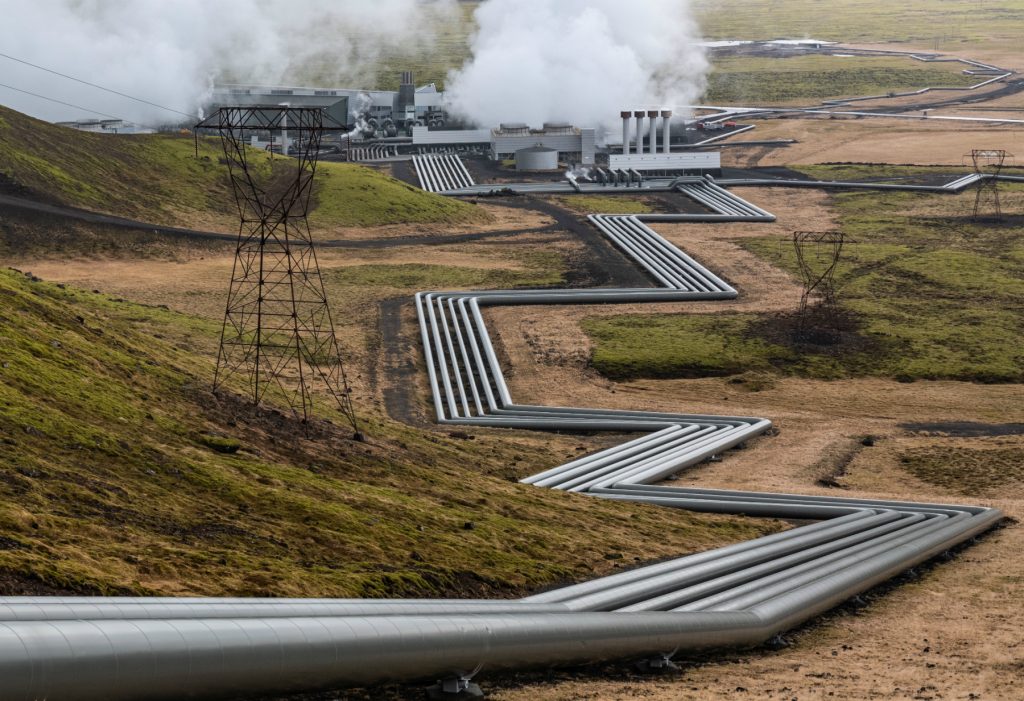 The Hellisheiði Power Plant in Iceland is one of many companies and initiatives in the country working toward reducing carbon emissions in the atmosphere. © David Hone

One aspect of the event I’m most looking forward to is learning from experts about the technology behind carbon removal and the ways the international travel community can support it.

As a non-scientist I’ve come to understand a few things:

The main problem with direct air capture, which could be “revolutionary” due to the fact that underground capacity available for storing carbon dioxide is vast, is that the cost at this time is very high. (At scale with greater usage, the price would come down dramatically). Also, there is not enough of a “commercial driving force for developing direct air capture technologies,” as noted by National Academy of Sciences report released in October 2018.

That may be changing quickly, though. As a resident of California, I was interested to learn about a new partnership between Occidental Petroleum and Carbon Engineering, one of three companies working to bring direct air capture technology to market. One of the incentives supporting the venture are the tax laws of California, the world’s fifth largest economy. The state has an ambitious 2050 net zero emissions goal; to meet it, California policymakers realized direct air capture would be necessary. In January 2019, they decided to permit any entity that captures and sequesters a ton of carbon dioxide from the air to claim a credit from California. These credits created a strong enough incentive that now Carbon Engineering and Occidental Petroleum have teamed up to “build a large-scale plant that will capture and sequester 500,000 metric tons of carbon dioxide from the air each year,” according to a 1 July 2019 article published by Quartz.

Similarly, Global Thermostat, another direct air capture removal company, has aligned with ExxonMobil. Switzerland-based Climeworks is looking at travelers as a possible market for carbon removal, with a banner on the company’s website proclaiming, “Turn your travel emissions into stone.”

According to estimates, negative emissions need to reach 1 billion tons by the middle of this century, so while 500,000 tons sounds like a lot, it is really just a start. That’s why more initiatives are needed to support companies trying to scale up direct air capture technology.

Critics of partnerships between direct air capture and oil companies observe that, while technically Exxon and Occidental Petroleum will be putting more carbon dioxide into the ground than burning oil will put in the air, they are not accounting for the carbon dioxide generated in the process of refining the oil to fuel or distributing it. And perhaps even more significantly, they say the use of direct air capture in this way reinforces consumers’ current usage pattern when it comes to fossil fuels and what we really need to be doing is consuming less. 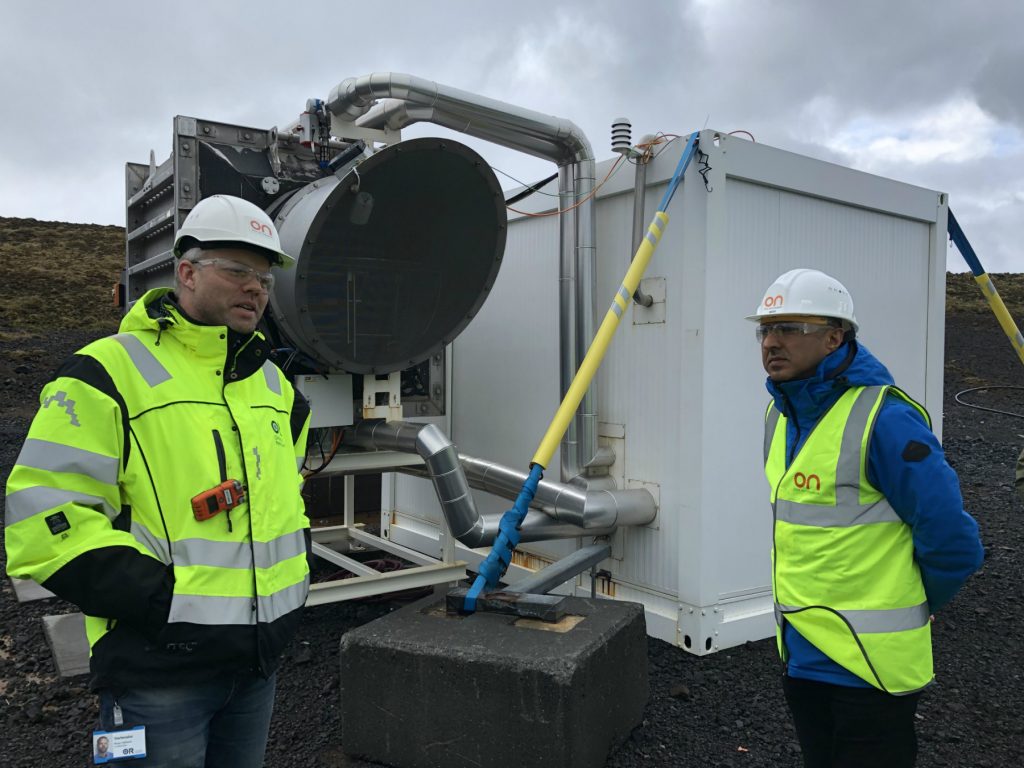 A direct air capture device in use in Iceland. © Casey Hanisko

The travel industry also owns a good share of the burden for carbon dioxide pollution. Travel is thought to make up 8% of global emissions. Although there is encouragement for people to travel less and rely less on fossil fuel-powered transport, reducing carbon dioxide emissions fast enough through these approaches will not be possible. Late last year, for example, the World Resources Institute noted that emissions, which appeared to be stabilizing between 2014 and 2016, were up once again: “While renewables are surging, energy use from fossil fuels is still outpacing low-carbon sources.”

In any case, even if we could significantly reduce new emissions, we still have the very serious problem of all the carbon dioxide emissions already stored in the atmosphere. We need to make progress on all fronts simultaneously: We need to stimulate consumer awareness and adapt our consumption patterns, we need to reduce new emissions, and we need to reduce the carbon already stored in the atmosphere.

It may be true that making direct air capture widely available simply gives offending industries (obviously oil and gas, but this could apply to tourism as well) a kind of carte blanche to continue polluting. However, given our timeline to decrease the carbon dioxide levels in the atmosphere, it seems like we might just have to accept this possibility and push forward anyway. As Princeton University’s Stephen Pacala, who chaired the National Academy of Sciences report, observed in a recent article in Wired, “By itself the climate problem creates a mass extinction. By itself the climate problem creates a food crisis that could be existential for humanity. We need to solve this and solve it right now.” Pascala recommends we “hold our noses” and realize we can’t let great get in the way of good.

We know increasing international travel is a piece of this story. As promoters and developers of adventure travel, the ATTA wants to be part of the change that helps tourism clean up.

What do you think about direct air capture? As a stakeholder in the travel industry, I’m interested in hearing your thoughts in the comments section below and at our Climate Action Leadership Studio on 20 September in Gothenburg, Sweden. Reserve your spot at this one-day event.