The Cairngorms National Park, previously 3,800 sq km now covers 4,528 sq km and is twice the size of the Lake District National Park and the Loch Lomond and the Trossachs National Park.  It is now home to over 17,000 people – previously 16,000.

The study has revealed a number of interesting trends since the Park was set up in 2003: 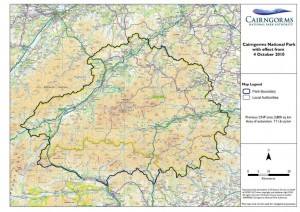 A map of the new Cairngorms boundaries as of October 4, 2010

John Swinney, Cabinet Secretary for Finance and Sustainable Growth and constituency MSP for North Tayside – who has continually campaigned for the inclusion of Highland Perthshire in the Park – unveiled a new Cairngorms National Park panorama at the Atholl Country Life Museum in Blair Atholl this afternoon (Monday 4 October) to formally mark the extension of the Park and to launch the economic report.

“The decision to exclude the area from the original boundaries is one which baffled experts and local people alike.  This set in motion a tremendous effort from politicians and local people.  I wanted to ensure that this wrong was righted, therefore I introduced my member’s bill in 2006 and continued to campaign tirelessly for the extension of the Park’s boundaries.

“When the new Scottish Government was elected in 2007, I was delighted that the then Environment Minister, Mike Russell, announced that the Government would work towards extending the boundaries.  We are now seeing the tangible result of this extension.”

David Green, Convener of the CNPA said: “I would very much like to welcome Highland Perthshire into the Cairngorms National Park and look forward to working closely with businesses, communities and other organisations in the area.  Highland Perthshire has tremendous natural and cultural value and it offers an enormous amount in terms of recreation.  It truly is a great addition to the Cairngorms National Park.

“While designation as a National Park may not be solely responsible for the achievements outlined in the ‘Economic & Social Health of the Cairngorms National Park 2010’ report, it is undoubtedly a key factor along with strong working partnerships with a variety of organisations – all of whom have helped deliver these social, economic and environmental benefits.

“Through the recent recession the Park’s economic and social health has remained strong and this will, I’m sure, benefit Highland Perthshire as it becomes part of the biggest National Park in the UK.”

Duncan MacKellar, of the Cairngorms Business Partnership and Visit Cairngorms said:  “The Cairngorms Business Partnership works with, and on behalf of, businesses throughout the UK’s largest National Park and we are looking forward to working closely with businesses in Highland Perthshire over the coming months and years.  It is encouraging to see the recent report, commissioned by the CNPA, showing that businesses within the National Park have continued to be successful despite the current economic climate and we hope that businesses in Highland Perthshire feel the benefits of being part of the Park.

“In addition, the inclusion of such a beautiful part of Scotland – and area that has so much in terms of activities, places to stay, visit and eat – means the Cairngorms National Park will now have even more to offer our visitors from all over the world throughout the year and further emphasises the fact that we continue to be a first class tourist destination.”

“From our perspective it is hugely important for the social and economic future of this area of Perth and Kinross to become an active part of the Cairngorms National Park.  I believe that the future economic, cultural and social wellbeing of the area will be well served by being part of the greater National Park area.  Perth and Kinross Council has already begun the process of co-operation with the CNPA and we wish them every success for the future.”

Today also marks the first day of the Adventure Travel World Summit (ATWS), which takes place in Aviemore from the 4 – 7 October (www.adventuretravel.biz).  It is the first time the ATWS has been held in the UK and is attracting 600 delegates from more than 50 countries to the Cairngorms National Park, who is a Major Sponsor of the event, along with VisitScotland.