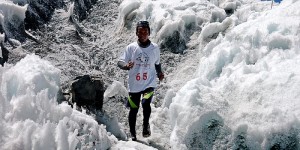 Himalaya Expeditions, the organizer for the renowned Tenzing Hillary Everest Marathon (T.H.E.M.), with a hope to revive the almost lost tourism in Nepal, have postponed the May 29 Everest Marathon to October 05, 2015. October, as the start of a new tourist season in Autumn, the October 05th Marathon could be a big publicity campaign for the International Tourism Market for the promotion of revival of Nepalese Tourism.

This year the marathon organizers have planned to start the marathon event in a different fashion. After the massive earthquakes, the revival of tourism is the main concern, not only among tourism persons but among all Nepalese. Thus to spread the propaganda worldwide about the normalcy in Nepal, the Peace flame from Buddha’s Birthplace, Lumbini is being taken to Everest for the first time, as Buddha Flame. Around the end of September, the Buddha flame would be carried from Maya Devi Garden, Lumbini up toward the High Everest Expedition Base Camp by the afternoon of 3rd October, to celebrate this year’s Tenzing Hillary Everest Marathon Event on 5th October, as the 13th Annual Episode. This is the first time ever in the history that the Buddha Flame is being carried and run from Lumbini all the way to Khumbu. 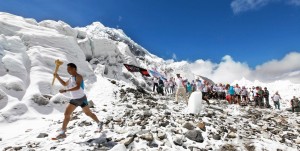 The marathon event has space for both runners and non-runners. The runners can participate in Ultra 60K, 42K Full and Half Marathon. For details regarding the race you can visit the website at www.everestmarathon.com.

This year, as the earthquake aftermath has slightly damaged some trails of Khumbu region, the team is also introducing a new volunteer’s trek, which they named, Re-build your Own Khumbu Volunteer’s Everest Trek. The money collected from the volunteer’s trek will be spent to build damaged homes and damaged trails of the Khumbu region. More information on the website.

The team of Everest Marathon has decided to contribute part of the marathon’s and volunteer trek’s money to Mother’s Group up in the Khumbu Valley to help the mission of re-building Khumbu.