The first international Accessible Tourism Destination (ATD2019) awards were held 22 January, 2020, as part of FITUR 2020. The World Tourism Organization (UNWTO) and Fundación ONCE celebrated the best ‘Accessible Tourist Destinations’, at FITUR, the tourism trade fair in Madrid. They are an initiative of both organizations that rewards the work of accessible tourist destinations for everyone. 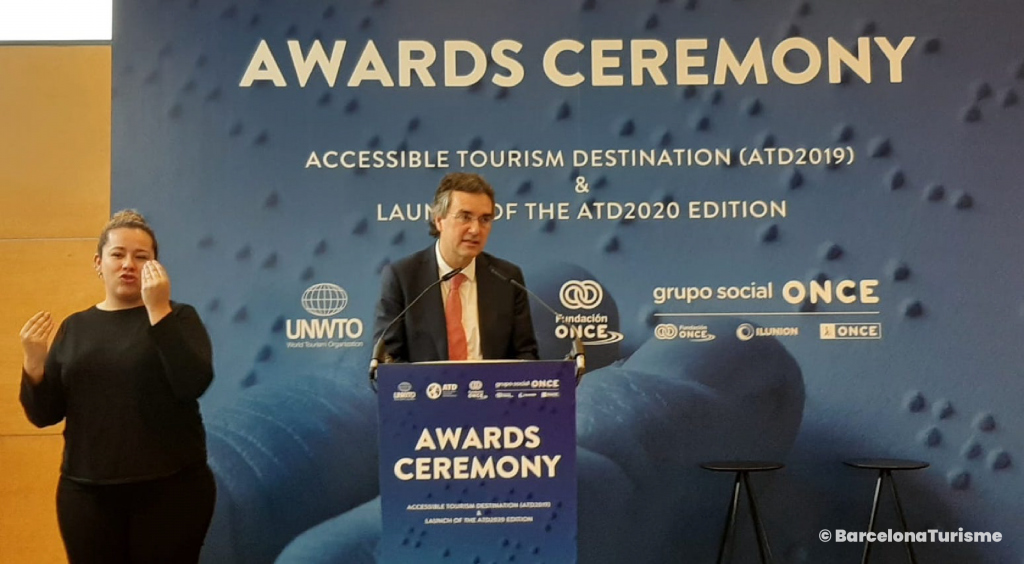 Eduard Torres accepts the award for Accessible Tourism Destination on behalf of the city of Barcelona, Spain. ©️ BarcelonaTurisme

With the award, Barcelona was recognized as one of the world’s most accessible cities. The beginnings of an accessible Barcelona can be traced back to 1992, when the city hosted the Olympic Games. This was the first time the Olympics and Paralympics had been integrated and given equal status, so all Olympic sites and venues were designed according to the highest accessibility standards.

Concurrently, the entire city underwent a major transformation that defined its future urban layout and, from its initial phase, included accessibility as an absolute necessity.

Since 1992, a concerted policy between Barcelona City Council and all its departments has been in place, in particular with the Municipal Institute for People with Disabilities and the private and service sectors, with the common objective of building a more accessible city.

Barcelona’s road system is designed to be accessible, with a complete system of ramps and walkways for visually impaired people and pedestrian crossings with audible signals. An impressive 91% of the stations on the Metro system have lifts at street level. All the buses on the city’s bus network are fitted with fold-out ramps and visual and acoustic signals. Public amenities such as museums, tourist attractions and hotels comply with accessibility standards, so they can be visited by everyone, regardless of physical, sensory or cognitive abilities.

The Turisme de Barcelona consortium created the website www.barcelona-access.com, which brings together all the city’s services designed to help visitors with any type of disability.

Accessible Tourism
According to the World Health Organisation (WHO), an estimated 15% of the world’s population (1 billion people) are living with some form of disability. The UNWTO is convinced that accessibility at all tourist amenities and services must be central to any responsible and sustainable tourism policy.

The creation of the “Accessible Tourism Destination” label is the result of the joint commitment of the UNWTO and the ONCE Foundation to recognize and promote accessible tourist destinations. The central plank of their aims is the recognition and dissemination of tourist destinations that are making major efforts to ensure their destination can be enjoyed by everyone, regardless of physical, sensory or cognitive abilities. The Accessible Tourism Destination awards put in the spotlight those initiatives undertaken to date, as well as efforts to maintain and increase the accessibility levels that have been achieved.