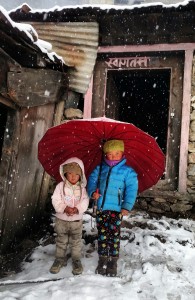 In May, the ATTA determined to help Nepal as the country began the staggering work of recovering from an event that killed thousands and affected millions who were trying to get back to life and work. We didn’t know how to be a disaster relief organization, so we had to rely on where our expertise exists. And that’s why we created AdventureWeek Rebound Nepal on the Great Himalaya Trails.

The ATTA regularly works with a corp of media and destination marketing superstars who understand what we’re trying to do: make travel better for the people who host us in their countries and the guests we convince to visit. We wanted to take those writers, photographers and professional adventurers to Nepal to determine if we as an industry could declare loud and clear that “Nepal is open for business.”

This was contrary to messages coming from other sources reporting that Nepal is unsafe, which we found to be plainly untrue. So much of what was being reported in the months following the earthquake has focused solely on trauma and damage. When an actress takes the stage and the spotlight is trained on only her, the audience has no choice but to look at her. In the meantime, in the background, unnoticed is a whole other reality of activity and movement. This is what has happened in Nepal. The media spotlight had led us to believe that Nepal was in essence flattened — that Nepal was certainly not somewhere you’d want to go or send your clients. While parts of Nepal have sustained some damage (14 out of 75 districts to be exact), the truth is that most of the country is still functional and more than ready for tourism. 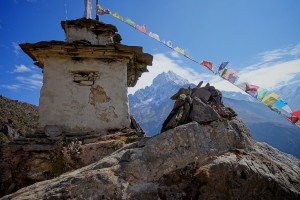 A stupa high about Namche, on the Everest itinerary. Photo © Christophe Noel

We decided we had to go. We curated a group of media and tour operators, 19 strong, split into two groups and each spent close to a week touring two of the most important regions of Nepal: Everest and Annapurna. We hiked, biked, visited cultural centers and libraries, ate dal bhat, paraglided, flew in ultralights, and shopped in local markets. We saw wildlife, hung out with locals and watched the full moon in the Himalayas. We saw so many attractions, hiked so many Great Himalaya Trails, stayed in so many great guest houses and hotels, and the outcome of that effort is quite straightforward: now we can safely (and loudly) say that the vast majority of Nepali tourism resources are open for business. And they are as magical and charming as ever.

Why does it matter that we went? Why is it important for tourism in Nepal to recover? Nepal’s economy is heavily dependent on tourism, which by all accounts appears to be down 60 – 75% based on numerous interviews within the supply chain. The implications of this are dire. Most of Nepal’s rural inhabitants are economically fragile and dependent on an industry that has trickled income into the most remote parts of the destination for the past 50 years. Adventure tourism, which is the core of Nepal’s tourism, leaves around 65% of the customer’s spend right there in local hands, which is remarkable compared to the alternative forms of tourism where much of the value leaves the local economy. 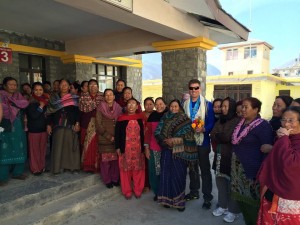 Implications of earthquake-induced poverty ripple outward: Wildlife are immediately at higher risk as people become desperate financially at the same time a reprehensible market for illegal wildlife body parts continues to thrive. Vulnerable women and children move closer to the dangerous line of having to do whatever it takes to satisfy needs for shelter and food. Men are forced to leave their families and countries to build soccer stadiums in Qatar and skyscrapers in Dubai under conditions that sometimes amount to indentured servitude. The longer tourism lags in Nepal, the more damage will be done to the social fabric of the country as well as the economic well being of her people.

There are signs of hope. After meeting with hundreds of Nepalis working in the tourism industry, we were encouraged by their drive to recover and determination to do it right.

Anil Chitrakar was our guide in Kathmandu and Bhaktapur — a master storyteller who gave us a top-rate education in the socio-economic-philosophic-spiritual- cultural-architectural history of the region. As modernity sets in and cultures trend toward the more globo-homogenous, we’ve seen the erosion of traditional skills and craftwork. But in Nepal, he explained, woodworkers have been turning out exquisite carvings for years — in part to satisfy tourists who want to take something beautiful home to remind them of their time in this magical place. So now, there are thousands of artisans equipped to help repair 700+ damaged cultural sites with an artist’s love and skill to keep Nepal’s story intact for the future. It might even be that the souvenir industry will suffer as a bit as these artists work on the “real thing” for a time. I expect we will see a burst of historic artistry flowing from Nepal when this is over. Chitrakar made this clear: “We have had to rebuild approximately every 100 years. We will do it again.” 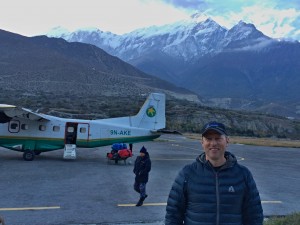 The tourism industry within Nepal is also doing what it can to help others. Fourteen villages in the Langtang area were wiped out in the earthquake. Dwarika’s Hotel, an iconic property in Kathmandu, has taken on the project to help these villages rebuild with the help of expertise both within and outside of Nepal. The aim of all parties involved is to combine and rebuild into six villages utilizing modern earthquake safety knowledge while also keeping the old cultural feel of traditional Nepali architecture. Right now, in the meantime, the people from those villages are in a camp, dubbed “Camp Hope” in Kathmandu in tents donated by Oman and the USA with as many as four families per tent.

What can we do now that we’ve been there? What can you do with what we’ve brought back? Keep selling Nepal. Keep encouraging your clients to go to Nepal. Call up your suppliers and get first-hand knowledge about what is possible to see and do on the ground. And you should go there too — go experience a people and a destination which has been rattled but not broken. Go because #AdventureCares