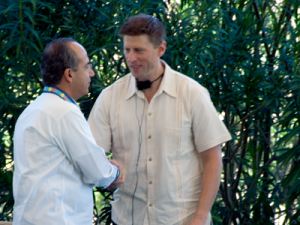 In Cancun, Mexico, today, ATTA President Stowell helped to raise the profile of adventure tourism at the [email protected] Event during the United Nations Climate Change Conference. Stowell presented an opening keynote at the GreenSolutions forum as a result of the direct invitation of Mexico’s Secretary of Tourism Gloria Guevara.

Secretary Guevara, who presented before Stowell, recently adopted favorable views about the potential for adventure tourism to empower local economies, protect wildlife, protect endangered human cultures and to have a soft footprint on the environment. Her increasingly enlightened views were influenced in part by the ATTA and Xola 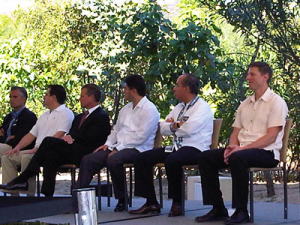 within Mexico’s tourism industry to consider the sector as a key to ensuring the long-term economic, social and environmental viability of tourism in the country.

In recent weeks, Secretary Guevara captured the interest of Mexico’s President Felipe Calderón, who today recognized the ATTA’s 2011 Adventure Travel World Summit slated for October 17-20 in San Cristobal de las Casas in Chiapas, Mexico. Stowell was a late addition to the speaker roster. That said, his rapid ascension to the top speaker panel reflects a shifting paradigm for how Mexico views adventure tourism. In just a few short weeks, adventure tourism has evolved – in the minds of Mexico’s leaders – into a pivotal role in the fight against climate change.

The following is the transcript of Shannon Stowell’s speech… 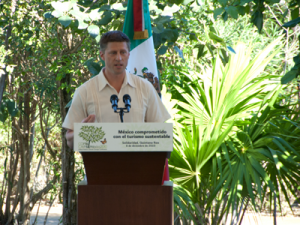 “Thank you to President Felipe Calderón.

Dear panelists and guests who have joined us

I was last in Cancun 24 years ago and have noticed that things have changed a bit! Clearly Cancun has become a major, high volume destination with all the attendant successes and challenges therein. 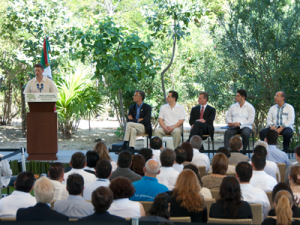 "Adventure travel is on the front lines of climate change issues."

affecting destinations and businesses worldwide and that is adventure travel.  It fits in this context because the whole focus of adventure travel is to empower local economies, protect wildlife, protect endangered human cultures and to have a soft footprint on the environment.  Today we’ll just focus on environment and climate change.

We were also invited to speak because in 2011 Mexico will be hosting the ATTA’s eighth Adventure Travel World Summit in the state of Chiapas where 600 key influencers from around the globe will gather to move a responsible tourism agenda forward and build responsible businesses.  Hosts such as Norway, Brazil and Quebec, Canada, among others have seen fit to host this important event in the past and now Mexico is putting its words to action by hosting the Adventure Travel World Summit in 2011.

Why does this growing segment matter to the discussions happening here and around the world concerning climate change and related issues such as habitat degradation, wildlife loss and continued poverty cycles?  Let me illustrate this with 4 points:

Much of what we hear in the news today is negative in regards to the environment and climate change.  And rightly so.  But are there bright spots?  Are there positive initiatives in the works?  Yes.  I’ll describe just a couple examples:

Lastly- examples of governmental and grass-roots initiatives are bubbling up all over the globe.  An example local to Mexico would be the Ruta Aventura, which connects responsible adventure businesses throughout the whole chain of a tourist’s experience  throughout Veracruz, Oaxaca and Chiapas.

We do face daunting challenges. Bill Gates was recently quoted as saying that “We need a miracle.”  And the tourism industry must address the issues head on.  Recently the astrophysicist Hubert Reeves from Canada gave some of the most sage advice that I think we can all take to heart as we move ahead in our mission- “I am not optimistic, nor am I pessimistic- I am determined”.”