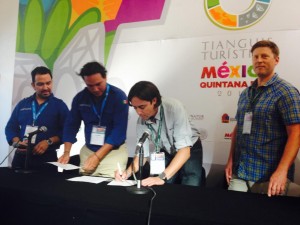 The Adventure Travel Trade Association has been on the move this month in Latin America. Here are highlights from some important events we attended in recent weeks in North, Central, and South America.

Brazil has been a key partner for the ATTA for several years, so we sent our Executive Director for Latin America, Antonio del Rosal, to attend the second World Travel Market –  Latin America in São Paulo, Brazil.  Antonio met with several Brazilian Regional Tourism Boards in an effort to help them better understand adventure travel and the tools they have access to through the ATTA to position themselves as adventure destinations. Great meetings with Embratur, Braztoa and ABETA (sponsor of the ATTA’s AdventureConnect event in São Paulo last month) solidified already effective partnerships in Brazil. 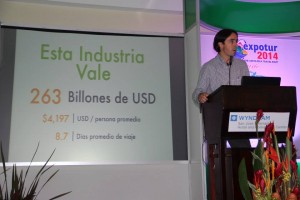 Antonio del Rosal talk about the value of the adventure travel industry at Expotur in Costa Rica.

The ATTA’s Latin America team stayed busy at Tianguis, meeting with several Mexican states inviting them to participate in our AdventureEDU program and AdventureWeek, key training and marketing opportunities.

Finally, the ATTA moved on to Costa Rica to attend Expotur Travel Mart, dedicated this year to the concept of adventure travel. Antonio del Rosal delivered a talk in English and Spanish, The Relationship between Sustainability Adventure Tourism and Corporate Social Responsibility, to an audience of students, tour operators,  and Costa Rica Tourism Board representatives. Antonio also had the chance to meet with the new Tourism Minister, Mr. Wilhem von Breymann Barquero, an avid motorcyclist and former adventure guide, who is keenly interested in continuing to position Costa Rica as the number one adventure travel destination in the world. The country’s president, Mr. Luis Guillermo Solis, highlighted several benefits of adventure travel in his inaugural address, but most notably identified adventure travel as a catalyst for economic development and poverty reduction. Through travel, he said, we create world ambassadors for peace.