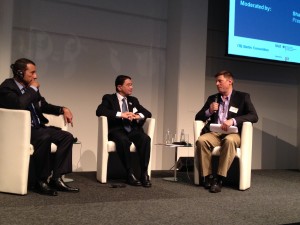 ITB Berlin is the leading trade show for the travel industry and “utilizes its key position in order to actively engage with companies in their efforts to create economically, socially, and ecologically responsible tourism products and services.” During the trade show in early March, ITB dedicated an entire day to a discussion of Corporate Social Responsibility (CSR) and invited Adventure Travel Trade Association President Shannon Stowell to be the host and moderator.

In his opening statement to the auditorium packed with industry professionals and government officials Stowell said, “Cultural and natural capital is what fuels us. It’s the oil of the tourism industry. And it’s finite. Unless we treat it right.” This set the tone for six hours of conversation surrounding what responsible tourism should look like.

During the keynote panel, Stowell had guests UNWTO Secretary General Taleb Rifai and Ecuador’s Tourism Minister Vinicio Alvarado visualize the tourism industry 50 years into the future, asking, “What will the planet look like 50 years from now? What will tourism look like?”

Secretary General Rifai said that travel isn’t just a human need, it’s a human right. His prediction for the future? “Every child, woman and man will be traveling outside their international boundaries — if there will still be international boundaries.” He mentioned that two-thirds of the world’s population needs a visa to prior to travel, which creates an unfair distribution of travel.

Through an interpreter Minister Alvarado said that Ecuador is the only country in the world that gives nature rights in its constitution and that 20 percent of the country is under conservation — which is the size of the entirety of Costa Rica. 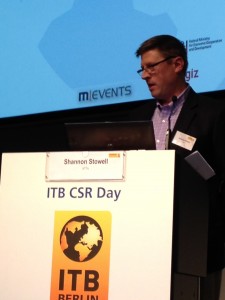 Concluding the discussion, Stowell asked Secretary General Rifai why he was encouraged by such rapid growth in the tourism industry. “Growth on one hand and sustainability on the other are not a zero sum game,” he answered. “We should embrace growth but turn it into a power that can be used to preserve our planet and take good care of our people.”

The sessions before lunch focused on human rights in the tourism industry. What can destinations do to make sure the proper attention is paid to human rights? Can ensuring human rights bring positive economic effects? Nicole White of the Association of British Travel Agents said that customers don’t want to think about the ethics of the company they are traveling with. A company’s blatant commitment to human rights means that customers don’t have to worry. Wolfgang Weitz of the International Labor Organization reminded the panel and the audience that the U.N. Guiding Principles on Business and Human Rights are minimum standards and that all travel companies should strive to exceed them.

These panel discussions concluded with the signing of a “Commitment to Human Rights in Tourism” by ITB’s CSR coordinator Rika Jean-Francois.

The sentiment of the day was summed up best by Secretary General Taleb Rifai who had the perfectly tweetable quote of the day “If a place does not become better when tourism activities touch it, then we should not touch it.”

The Adventure Travel Trade Association is proud to be a part of CSR Day at ITB and looks forward to pushing ITB attendees to pursue these serious discussions, both every year at the trade show and every day as they operate on the front lines of the tourism industry.