In 2019, 160,000 trade professionals descended upon Berlin, Germany, to attend ITB Berlin, the world’s largest travel trade show. For many travel professionals and companies, this is the event to attend. ITB China, which debuted in 2017, has a different professional focus and isn’t nearly as large as ITB Berlin, but it’s importance for those working in the Chinese marketplace is evident. The two events may have different purposes and be held in different parts of the world, but it’s no surprise the Adventure Travel Trade Association (ATTA) is actively present at both.

ATTA: What is ITB? What is the difference between ITB Berlin and ITB China?

Nikolova: I haven’t been to ITB China so I don’t know the difference. Have you been to ITB Berlin?

Finifrock: No, but I know the difference.

Nikolova: (laughs) Well, ITB Berlin is the biggest travel trade show globally. It’s a meeting trade show, and it stays on top of trends in the industry. 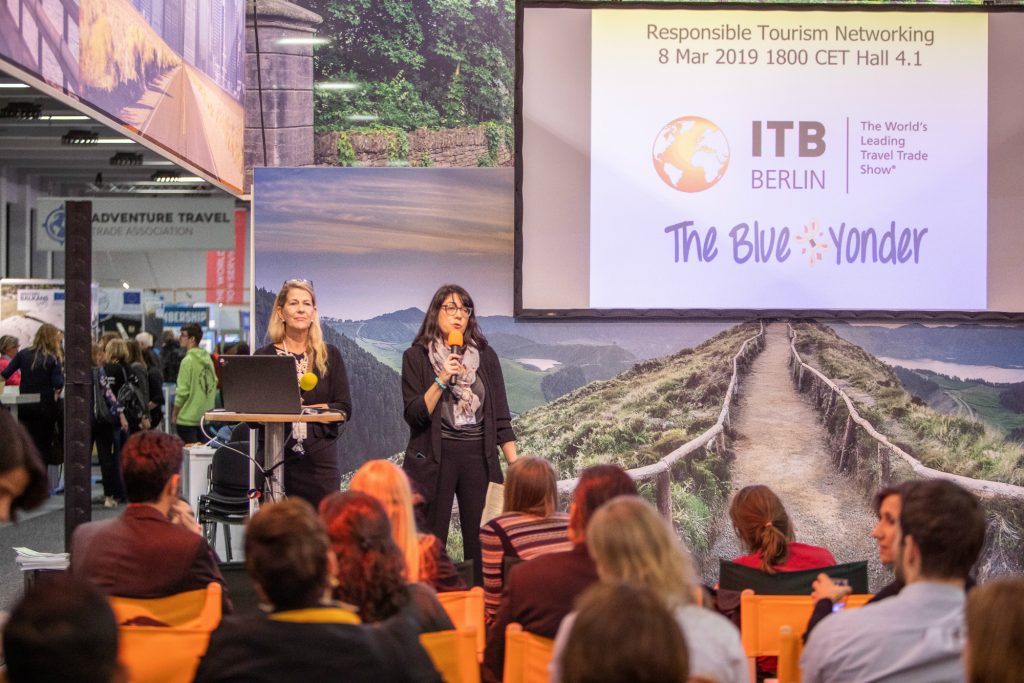 The ATTA has supported the adventure and responsible tourism hall at ITB Berlin for many years. © ITB Berlin

Finifrock: There is a show called ITB Asia that’s more similar in scope to ITB Berlin where people come from all over the world — inbound/outbound operators, destinations, tourism boards. But they’ve discovered the China market is the largest market in the world and there are so many barriers to entry and so many peculiarities that they weren’t getting a lot of the Chinese people going to ITB Asia in Singapore, so they decided they wanted to have a footprint in China itself.

ATTA: How are ITB events different than other travel and tourism events?

Nikolova: ITB Berlin, in particular, is humongous. The size is one of the big differences. It has a lot more opportunities for relationship building and networking, and covers a lot more topics with discussions and educational sessions.

Finifrock: ITB China is not super crazy in and of itself. It’s a much smaller show — much smaller than ITB Berlin — and it’s well managed.

Nikolova: Most of the destinations we work with in Europe participate in ITB Berlin, and they may not go to World Travel Mart (WTM) London, which is also one of the major European trade fairs. But they’ll definitely have a presence at ITB. ITB is definitely a global event where people can meet many colleagues from different parts of the world in one place.

ATTA: What role does the ATTA play at ITB Berlin and ITB China?

Finifrock: The ATTA was pursued by ITB China. They wanted to have some adventure offerings because they see demand for adventure as a growing travel trend. They saw us as the global leader in adventure and we already had the relationship with ITB Berlin, so the organizers of ITB China invited us to be present there.

Nikolova: In Berlin, the event is laid out by region, but there is also thematic grouping. For about ten years, the ATTA has been supporting the development of the adventure and responsible tourism hall. This is the fourth year I’ve been at ITB Berlin, and every year the hall grows fuller and we see more destinations present there. In the past, most of the stands were held by tour operators but now entire destinations find it attractive to be present and are repositioning toward adventure in this way.

Finifrock: There’s a lot of crossover between ITB Berlin, the ATTA, and ITB China. We had a lot of partners attend ITB China — people we work with or who are members. Even more than we knew were aware of.

ATTA: Why is it important for the ATTA to be present at ITB Berlin and ITB China?

Finifrock: We have a desire as an organization to be a voice of leadership for promoting responsible travel and adventure travel. And not just the travel but the way we travel. I think it’s really important to be part of the conversation in China because you’ve had this massive outpouring of luxe or mass tourism, and it’s just done in a “Chinese” way. This is a long, historic conversation about how travel has been done and how the government has allowed it to happen. As there have been more freedoms, companies are just doing it in the same manner. Being part of the conversation to say there’s something more, there’s something different, there’s something better — a better way to travel not only for the destination but also for your clients — is important.

Nikolova: I totally agree with everything Jake said. It’s important to demonstrate the impact of adventure travel and help shift the thinking across the industry at large. We need to be present at these events and be visible so we can maintain that leadership role and grow our impact globally.

Finifrock: We’re there. We’re at the table. A lot of things happen around ITB because everyone knows everyone is going to be there.

ATTA: Why is it important for ATTA members to be present at ITB Berlin and ITB China?

Nikolova: We have a partnership with ITB Berlin where we offer a discount for our members to participate. Our members find it interesting because they are able to nurture relationships outside of the traditional outdoors community.

Finifrock: If our members want to interact with the Chinese market, it’s a good venue to do that. Operators go to ITB China because they want to benefit from the growing Chinese market. Very few operators would go because they want to learn more about China. They’re either committed or they’re opposed to China, and the ones that are committed want to go and advance their presence in this market.

Nikolova: Many of our members prefer not to attend ITB Berlin as it is quite expensive. The smaller companies especially prefer to go to more specialized trade fairs where they can meet with smaller or more focused buyers.

For destinations there are also pros and cons, and their presence should be considered carefully on the basis of the overall strategy. For emerging destinations, ITB Berlin is “the thing.” Very often we’ll see these destinations trying really hard to be at every ITB Berlin to seal deals, but that might not be the best investment because they’re not ready for volume, or maybe they should be pursuing the development of more specialized forms of tourism. They might be better served at a more tailored event. For example, if they offer outdoor activities, it might be better if they go an outdoor show.

Finifrock: On the China side, you see represented tourism boards that are national or regional. For all of them, China is likely a priority market so there is an expectation they will be present and will seek to expose their destinations to the Chinese outbound market. This makes it very important for them to have representatives at ITB China.

ATTA: What happens at these events for ATTA staff and members who attend?

Finifrock: For members who wanted to attend ITB China, we helped them understand a bit about China in the lead up to the event, what the event might be like, and what they should know about the Chinese market. We helped them vet the potential buyers and gave them recommendations of companies we thought might be good matches for them. That wasn’t based on encyclopedic knowledge of the buyers. That was based on my personal takes on these companies. If the members wanted it, we helped members ahead of time organize their meetings. 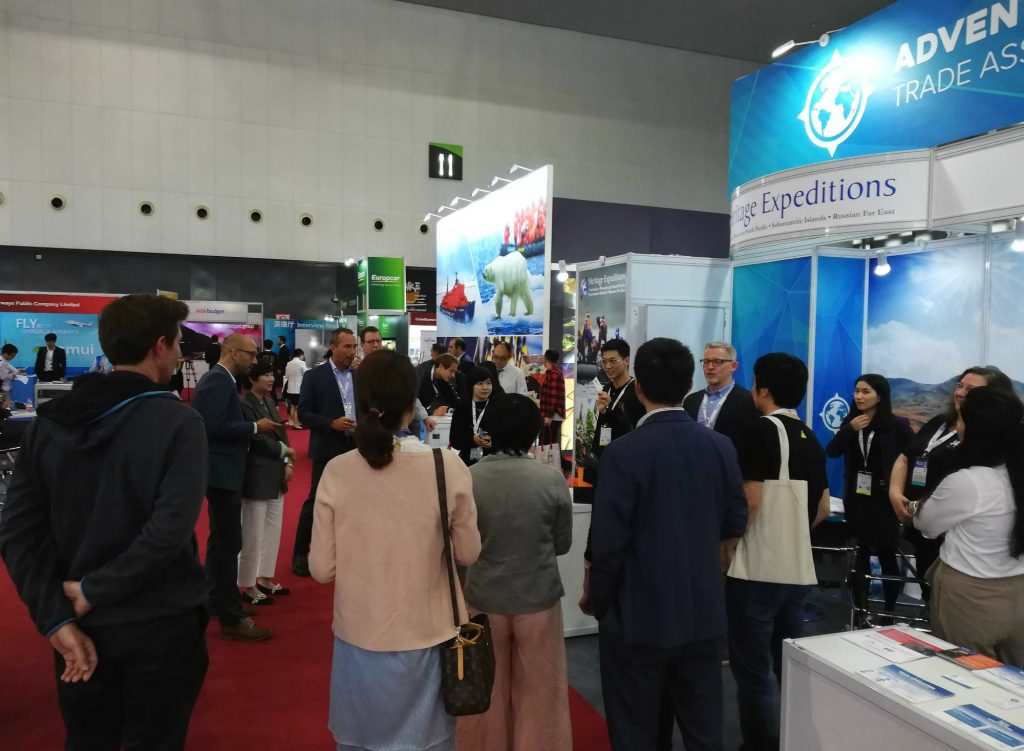 The ATTA’s booth at ITB China served as a hub for many members. © ATTA

We had staff on site, and both of us are fluent in Mandarin and English, so we were able to help if there was ever any need.

We also had a content session, which was mostly attended by Chinese buyers, and it gave more exposure to the ATTA members at our booth. And we had an AdventureConnect as well, which was another point of contact for our members that was different from just being one in a sea of all kinds of international companies at the event. They were connected to ATTA, which was connected to the Adventure Pavilion as a partner of ITB, so it gave much more brand exposure and buy-in to our members.

Nikolova: ITB Berlin also has a lot of content, and at the 2019 event, the ATTA held an AdventureConnect plus had three more speaking engagements. We had presentations on sustainable tourism but also one session in the tech track. Next year we hope to continue extending our impact in these relevant industry areas at ITB Berlin as it helps strengthen our visibility as a thought leader and expert.

Finifrock: ITB China had good and meaningful content as opposed to just meetings. They were really trying to get ahead of trends and educate attending delegates. There were a lot of learners there.

ATTA: How has ITB and its role in the industry been changing with the dynamics in our marketplace?

Nikolova: ITB Berlin has a new technology travel market space, so the organizers are obviously paying more attention to technology and how technology is impacting travel. They are staying on top of trends and shifts in the industry so they can stay relevant to the professional community.

Finifrock: I know ITB China used to have four specialties for travel (island travel, adventure travel, sports travel, and culture travel), and they’re trying to run with this idea — staying ahead of trends and allowing the content to be more than just a big pot of mixing and matching. They’re trying to sort things into categories that make it easier for Chinese buyers to figure out what they want to do and how they want to focus in their businesses. Based on that focus, then they can be supported based on the of grouping companies, which means they make connections with like-minded people. That’s one of the things they’re doing in China to stay relevant and differentiate themselves from other large trade events.

ATTA: Can you share an anecdote, story, or moment that occurred during your ITB experience this year that demonstrates the power and importance of ITB?

Finifrock: Gergana, you probably had this happen at ITB Berlin too, but I thought it was pretty cool for people from the ATTA community to see us at the event and come to us. Because of their connection with us, they were already connected with other people and companies at the event.

We were connected with the China Responsible Tourism Council, which exists, but they’re fledgling. When they found us, the guy was like “Hallelujah, I’m in nirvana!” He wanted to know where we came from, where we’ve been, and more about our 1,400 member companies throughout the world. We hope he’ll be able to join us at the Adventure Travel World Summit.

Nikolova: We’ve had contact with TÜRSAB, a public association of tour operators and travel agents, before, but because of our meetings at ITB, they expressed interest in a partnership. It shows why we should be there and what the opportunities are.

Finifrock: After I gave a keynote presentation, I was at a panel, and after that I was approached by a sea of people who wanted to talk and connect with us. Two people came up to me who represented a consortium of small Oceanic countries, and they were on fire. They were excited to know about the ATTA, to understand what we stood for — this whole idea of value over volume, the idea of a type of travel that leaves more in a destination, that connects people together.

So, here is an organization we wouldn’t have contact with if they hadn’t seen us at the event, and they are really well positioned if we ever do anything in those regions. Or, perhaps with our content and prescense, we had the opportunity to inspire them to pursue development with an emphasis on responsible tourism. I was inspired by their energy and their excitement.