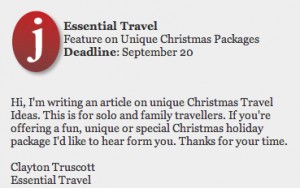 Since their inception, ATTA “Journalist Alerts” have been one of the most popular benefits of membership for Tour Operators and Accommodations. Members have been featured prominently in major media outlets including national magazines and newspapers, international publications, blogs, and more.

Just recently, ATTA members ExpeditionTrips and Tropical Tree Climbing were featured in the article Celebrate Christmas the Traveler’s Way due to their quick turnaround in response time to a Journalist Alert sent in September this year.

Past Journalist Alerts have come to the ATTA from such outlets as:

Learn more about the ATTA’s Journalist Alert system with this Q&A with Editor of AdventureTravelNews, Chris Doyle.