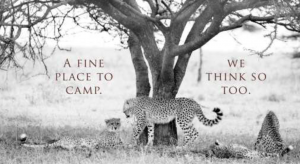 To mark their 10th birthday, Asilia Africa will open their new Serengeti Camp, Namiri Plains, on the 1st July. Set in an area of the Serengeti which was closed to outsiders as a cheetah sanctuary for over 20 years, this is one of the Tanzania’s best kept secrets.

Namiri means ‘’big cat’’ in Swahili and the name could not be more apt for this beautiful region of the Serengeti. Closed to the world for over 20 years to create a safe haven for cheetah breeding and research, today the area has an exceptional population of big cats including the highest density of cheetah in East Africa.

Namiri Plains is set in a small fever tree forest with uninterrupted views of the sweeping plains ahead. These plains are home to the great migration from November to June as millions of wildebeest continue their endless journey for food and water. The 6 traditional safari tents have all the creature comforts you need; crisp linen, spacious verandas and home cooked food eaten under the African stars but leave only the lightest footprint on the environment. Over dinner learn more about the academic research happening in this region from the resident cheetah researcher and the conservation projects Asilia Africa supports.

Guests will explore the area on daily game drives; enjoy sunrise breakfast picnics on top of Soit le Motonyi rock or sundowners atop a kopje. Whilst exploring, guests will feel like they have the Serengeti to themselves, which they do, in fact Namiri Plains’ closest neighbour is over 45 minutes away making other vehicles an unusual sighting.

Asilia Africa is very honoured to have been invited to open the first camp in such an ecologically significant part of the Serengeti. Asilia was chosen because of their success in establishing tourism in pioneering areas such as the Northern Serengeti in 2005 and Rubondo Island in Lake Victoria in 2012. Asilia’s mission is to create lasting conservation based economies and to preserve these wilderness areas for generations to come.

Namiri Plains starts at US$ 660 per person per night including all meals, drinks and activities but excluding park fees.