Boston, MA.—The Archeological Institute of America’s (AIA) Site Preservation Program announced today that Giorgio Buccellati, co-director of the Mozan/Urkesh Archaeological Project and professor emeritus at the University of California, Los Angeles will be the first recipient of the AIA’s Best Practices in Site Preservation Award.  The Award was established last year by the AIA Site Preservation Committee to identify and promote best practices in the interdisciplinary field of site preservation and will be presented at the AIA’s 112th Annual Meeting this weekend in San Antonio, Texas.  Buccellati received the award for his exceptional conservation work at Tell Mozan (ancient Urkesh) in Syria and particularly for his efforts in the conservation of mudbrick—a notoriously difficult material to preserve.  Mudbrick is extremely fragile and exposure to the elements causes it to deteriorate rapidly. 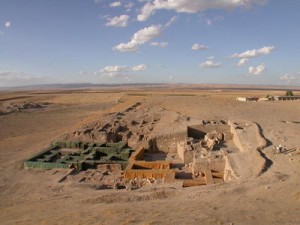 The Royal Palace of Urkesh was built around 2250 B.C. by the Hurian king, Tupkish. Buccellati’s excavations at Tell Mozan began in 1984 and as part of his excavation process, he developed a method of covering the mudbrick walls with covers that protect them from sun, wind, rain and even snow. By doing this, Buccellati’s team preserves the integrity of the excavated remains while simultaneously conveying the architectural concepts of the site.  Buccellati says his experimental preservation efforts are “a bit like an experiment in ‘real virtual reality.’”  The covers are low‐cost, renewable, locally constructed, and easily removed to allow for inspection of the walls.  This innovative approach used at Tell Mozan combines archaeological research with creative preservation solutions and Buccellati’s ability to work with the local community, providing training and income, ensure a local commitment to the project that is critical to the long-term preservation of the site.  Plans are also currently underway for the initial construction phases of an eco-archaeological park that will cover an area of some 25 km2 around Tell Mozan.