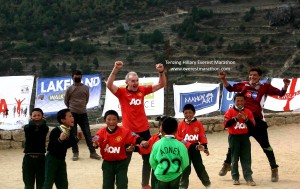 Kids in oversized Manchester United jerseys play football in a school ground in Namche with some participants and Everest Marathon team. It was a charity match where kids received player worn jerseys directly from Manchester United.

The 14th edition of Tenzing Hillary Everest Marathon successfully took place on May 29, 2016 at Namche Bazaar. Tenzing Hillary Everest Marathon is regarded as the World’s Highest Marathon that starts from the Base Camp of Mount Everest (5,364 metres) and ends at Namche Bazaar (3440 metres). Since 2011, every year this event takes place on May 29, which marks the anniversary of first ascent of Mt. Everest by the legendary duo Sir Edmund Hillary and Tenzing Norgay Sherpa. This event is hosted and organized my Nepal’s Pioneer Mountaineering & Trekking Company, Himalaya Expeditions; Mr. Bikram Pandey being the Founder President. 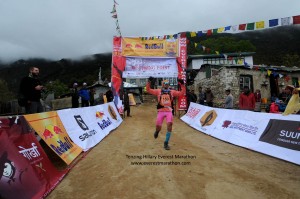 Robert Celiński from Poland has once again notched the first place in International Runners Category with timing 4:24:02 hrs.

Only last year, i.e. in 2015, the marathon could not take place on May 29 as Nepal was destruction struck by the major earthquakes of April 25 and May 12. But due to the need of reviving tourism in Nepal, this event was carried forward to October 05, 2016 with a campaign of “Revival of Tourism in Nepal” and “Rebuilding Nepal”. Even during the earthquake catastrophe, this event was a huge success and was helpful in spreading it to the world that Nepal has revived after the earthquake disaster and is safe to visit. That year 80+ International runners participated in the marathon and with 100+ National runners.

As each year Tenzing Hillary Everest Marathon is organized with a theme, this year Everest Marathon was also organized with a special theme as year 2016 marks the 200 years of Nepal Britain Relationship. For the celebration of this Bicentenary Relationship and to recognize this special event officially, British Ambassador, His Excellency Richard Morris chaired the event and also made a symbolic run of 200 meters, giving a positive message on how beautiful Nepal Britain Diplomatic Relation has evolved to this height, through 200 years of excellent relationship. Plus he also ran 8 kms, 848 meters to the finishing point, symbolizing the height of Mount Everest. 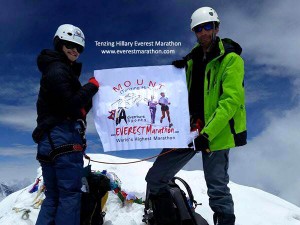 Plus, a small charity football match was also organized by one of our marathon runners where local kids participated and were given merchandised Manchester United jerseys.

Tenzing Hillary Everest Marathon has 4 categories- Everest Extre Ultra (60K), Full Marathon, Half Marathon and Run from the Base Camp; and every year National and International winners are chosen separately from these categories. More details on winners can be checked from the Facebook page.

Like all the past years, exhilarating marathon was experienced this year as well and more excitement is about follow in the past years. To know more about the World’s Highest Marathon, check the website.