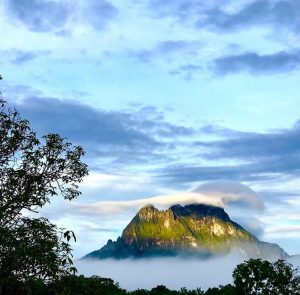 Due to an extremely remote location in a Northern Amazon river basin 180km from the nearest town (São Gabriel da Cachoeira) and often completely covered in the mist that gave its name, Pico da Neblina remained undiscovered by outsiders until the 1950s.

Pico da Neblina is located within the territory of the indigenous Yanomami reservation. The difficult-to-ascend mountain had once been open to ambitious climbers looking for a challenge, but has been closed to tourism since 2010. A re-opening is underway, one that will be much more sensitive to the profound indigenous culture of the region than efforts had been in the past.

Amazon Emotions, owned by Vanessa Marino, has been chosen after a long vetting process to help oversee the operations of sustainable tourism in this sacred area which has been threatened by mining and deforestation. Many indigenous have been lured into gold mining as a way to support their community – opening the peak to tourism seeks to offer a more sustainable alternative. Marino was chosen in part because of her considerable experience respectfully working alongside indigenous communities and she has dedicated her career to fiercely protecting the Amazon. The Picó de Neblina project will be used as a template and a springboard for other indigenous communities in Brazil to protect their land and culture through responsible tourism.