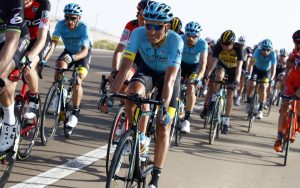 Stepping in the wake of the prestigious, 40-year-long history of “Giro del Trentino”, the first edition of the new “Tour of the Alps” promises to put on an enticing show from April 17 to 21, 2017.

Five days of passionate cycling: Completing its 40th edition in 2016, the Giro del Trentino will expand its geographic range and become the Tour of the Alps in 2017, following a spectacular, intense, unpredictable route. Aptly named, as it crosses the three-part cross-border region comprising Trentino and South Tyrol in Italy, as well as the Austrian Tirol. Seen as a key final test before the Giro d’Italia, this beautiful stage race is a journey over the European Alps, from Austria to Italy, stopping in beautiful mountain towns and villages, and crossing areas of awesome natural beauty.

In 2017, two stages will be run in Tirol, one in South Tyrol, and two in Trentino. Formerly known as the Giro del Trentino, the race renamed itself the “Tour of the Alps” and added another stage to the menu, expanding from four to five days. During the first edition of the new “Tour of the Alps”, the race will hit all three capitals of the three-part cross-border region, Tirol’s Innsbruck, South Tyrol’s Bolzano and Trentino’s Trento.

One of the most exciting novelties of this year’s cycling season, the “Tour of the Alps” will start in Tirol’s Fortress Town Kufstein. The route will circle picture-postcard Walchsee Lake on its way to Kramsach close to Alpbach and continues to Tirol’s capital Innsbruck. The final climb brings the riders to Hungerburg, where the first day of racing comes to an end with amazing views of Innsbruck. 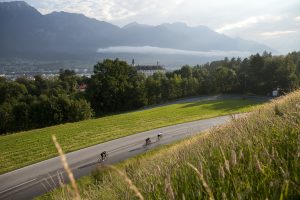 On race day #2, the starter’s gun will be fired in Tirol’s capital: The second stage leads from Innsbruck via San Lorenzo di Sebato and Sillian to Innervillgraten in Osttirol (East Tirol). Undisputed highlight of the route is the ride across the mighty Bridge of Europe.

18 Teams Will Compete for Their Chance at Glory

Competition, in name at least, will be fierce at the “Tour of the Alps”, with 18 teams and 144 cyclists. Italian superstar Fabio Aru, winner of the Vuelta a España in 2015 and 2nd overall at the Giro d’Italia 2015, has confirmed he will return to racing at the new “Tour of the Alps”. The Astana Pro Team rider will face fierce opponents and very demanding routes, perfect to take stock of his training schedule. The former Giro del Trentino multi-day stage race has long been a key prep race in the run-up to the Giro d’Italia, with numerous pink jersey contenders in attendance every year.

The new “Tour of the Alps” will be a can’t-miss fixture for the cycling fans worldwide as the stage race will be aired live on TV: The three-part cross-border region event will debut on the international scale with a 1.5 hour daily live coverage by Eurosport as rights holder. More leading European broadcasters such as RaiSport (Italy), Equipe TV (France) and TV2 (Denmark) will display the race as well.

Moreover, there will be online streaming: The “Tour of the Alps” will be broadcast live on the Web by Cycling TV, North America; Econet, Africa; Repubblica.it, Italy to name but a few.