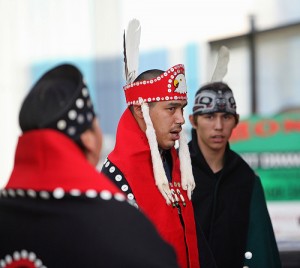 According to a recent article in the Alaska Journal of Commerce, travel experts are reporting a rising interest in cultural tourism in port towns and small villages in Alaska, where tourists are coming in rising numbers to learn about the traditions and lifestyle of Native American Alaskans.

One cruise ship destination has even boosted the economy of an entire southeast Alaska village, thanks to a long-closed salmon cannery that was converted to a tourism complex near Hoonah. The privately owned Icy Strait Point features Tlingit heritage performances, restaurants and nearby attractions including nature tram rides, fishing excursions, whale-watching tours and a mile-long zipline with a 1,300-foot vertical drop… Since opening in 2004, Icy Strait has brought in hundreds of thousands of visitors, including 123,000 people last year, according to corporation figures. The attraction has created more than 130 seasonal and permanent jobs annually with most of the jobs going to Hoonah residents, making the corporation the largest local employer….Last year, it meant a total of $3.6 million to the economy, including 60 percent of the community’s sales tax revenues, according to Huna Totem CEO Larry Gaffaney.

“It’s a huge engine in the community,” Gaffaney said. “Absent that, the community would look very, very different.”

The article also explores the additional boost of pride and interest in Native traditions that outside tourist interest helps instill in Alaskan youth.

For more on this cultural tourism trend in Alaska, read the entire article