Beyond Peru’s most popular attractions lies a country bursting with unexplored regions waiting to be revealed. During AdventureWeek Peru, 20 international buyers and 5 media spent time in two separate areas in the country: the Ancash region and the Amazonas region. The Adventure Travel Trade Association (ATTA) tagged along to share tales from a Peru that few people even know exists.

Tale #1: A Breath-Taking Journey Through the Ancash Region

My heart beat faster — much faster — especially during the first 20 minutes of hiking at altitude. It would beat so fast until, finally, it found a comfortable rhythm. The thin air, the mountains draped in glaciers, and the verdant valleys sprinkled with colorful wildflowers and laced with waterfalls left me absolutely breathless — literally and figuratively.

The Cordillera Blanca of Huascaran National Park has more than 770 glaciers and several peaks soaring 6,000 meters above sea level. For my fellow adventure travel trade companions and I, who hail from regions in five countries much closer to sea level, the altitude was nearly as noteworthy as the quiet trails and grandiose peaks. Located in the Ancash region north of Lima, the Cordillera Blanca is the world’s highest tropical mountain range. Huascaran National Park, a UNESCO Natural Heritage Site and Biosphere Reserve, protects the 10 species of mammals, 120 bird species, and 779 plant species that inhabit its 340,000 hectares. Beyond its biodiversity, this part of the country has many pre-Columbian remnants as well, such as agricultural terraces, corrals, roads, dams, and water canals. The Ancash region is packed with archaeological sites — there are 33 in Huascaran National Park alone! 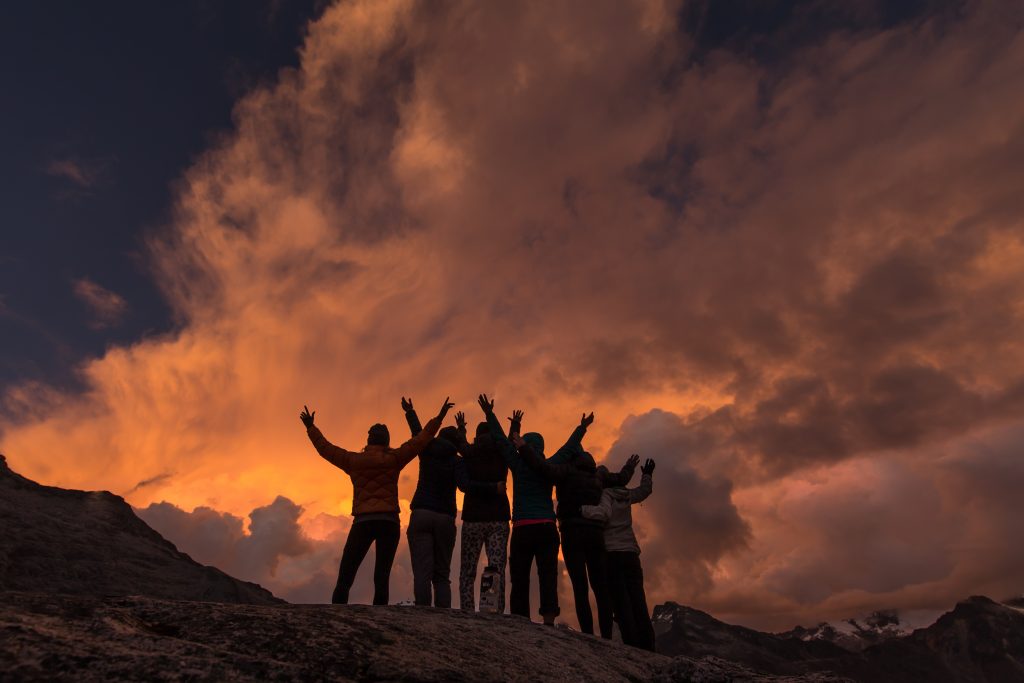 Hiking in Ancash is a reminder of how big the world really is. © ATTA / Charley Voohis

Huaraz, an eight-hour overland journey northeast from Lima and the capital of the Ancash region, was our base during AdventureWeek Peru. Our ultimate goal was an overnight trek to nearly 5,000 meters. To prepare, we spent a few days hiking among mountain lakes at higher altitudes but slept at a lower elevation. Known for its sheer number of 6,000+ meter mountains, this area of Peru brings out a sense of awe in travelers. Trekking through the valleys peppered with grazing cattle and up rocky paths with towering peaks in all directions, we felt small in an oversized landscape but also like we were part of something bigger. Luckily for us, we had several days to drink in just a tiny sip of the Ancash region’s magical elixir.

Our first acclimatization hike took us to Laguna Wilcacocha, a small lake not far outside of town in the Cordillera Negra. A relatively short trek, this introductory hike provides a panoramic view of the Cordillera Blanca range — if the weather cooperates. Though clouds obscured the grand view for us, the open landscape gave us an intimate glimpse of the local community. Men prepped their fields with ox-drawn plows and women in traditional felt hats tended to their gardens as we trekked down the rocky trail through villages along the way back to Huaraz.

The Cordillera Blanca boasts at least 25 trekking routes ranging from two to 14 days as well as many day hikes of varying difficulty levels. During our second acclimatization hike, we kept our eyes on Huantsan towering at the head of the valley; at 6,395 meters, it’s known as the “K2 of the Andes” due to its advanced mountaineering routes. Our trail gradually climbed through a lush green basin among the mountains. Surrounded by ribbon-like waterfalls streaming down the valley walls, a watercolor palette of yellow, white, and purple wildflowers, and a soundtrack composed of a light breeze and bubbling stream, this hike filled me with a sense of peace. At one point, the sun cut into the valley in such a way that it reflected perfectly off the brook and illuminated a cow as it munched on grass, stopping me in my tracks to take in the beauty of the scene.

Our ultimate objective was an overnight loop trek to Refugio Peru (the base camp for climbers summiting Nevado Pisco) then up to and over Condor Pass to the too-blue-to-be-true Laguna 69. At 4,665 meters, Refugio Peru’s landscape is raw and stark, carved by glaciers and water. The evening before we set out, I was reminded of how small we really are in this great big world as night fell and stars flooded the dark sky.

Early the next morning, we hiked to our highest point — 4,950 meters — at Condor Pass, where we stopped to refuel with coca tea and fresh passion fruit. Continuing along the trail, we arrived at the brilliantly turquoise Laguna 69 with the dramatic Chakrarahu soaring high above it. The contrasting colors of this landscape — blue, white, gray — are simple but striking. We lounged by the lake for a while before, reluctantly, hiking back to the trail head at Cebolla Pampa, marking the end of our trek. 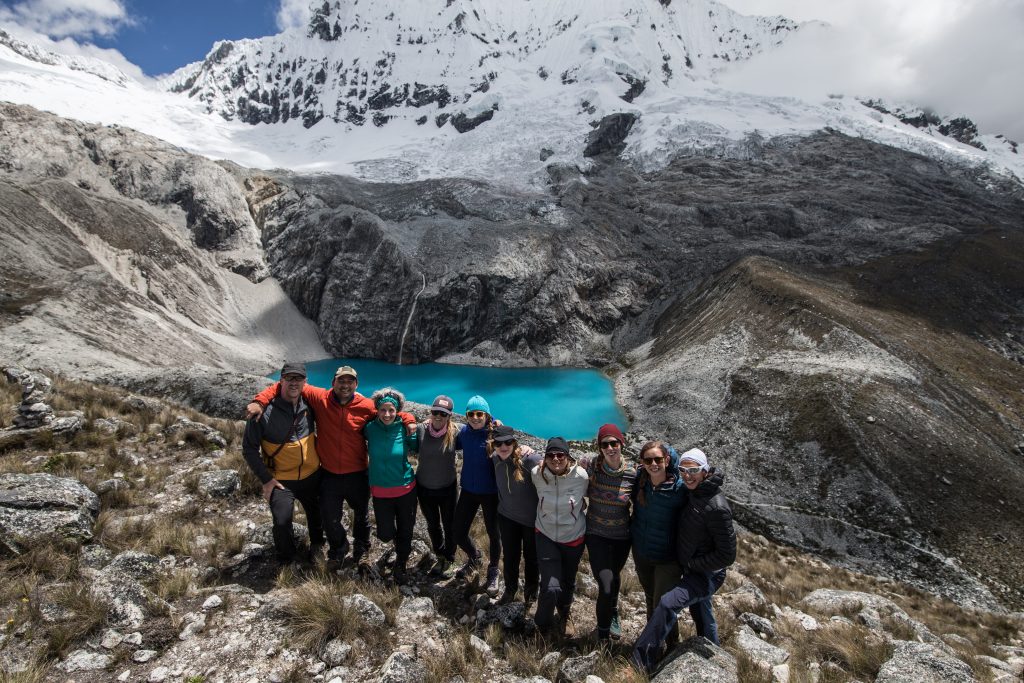 Our trip coincided with the very start of the dry season, and the forecast prior to departure was a 60% to 100% chance of rain every single day. We would have been lucky to see any mountains at all if the forecast had been correct. However, Pachamama, the highest divinity of the Andean people, had other plans. She granted us absolutely spectacular weather and we witnessed the mountain apus, or spirits, in all their glory throughout our Ancash adventure with candy-colored sunsets, clean mountain air, and even a rare condor sighting. Despite the many miles we hiked over the course of four days, our day hikes and overnight trek only scratched the surface in this area known not only for its trekking but also its mountain biking, paddling, rock climbing, mountaineering, and fishing.

Having trekked several times throughout the Himalayas of Nepal, Bhutan, and India, where peaks are routinely above 6,000 meters, I can attest that the Cordillera Blanca of Peru is equally majestic, awe-inspiring, and, yes, breath-taking.

Tale #2: Once Upon a Time in the Amazonas Region

In northern Peru on the eastern side of the Andes is a landscape of high mountains, cloud forests, deep canyons, big waterfalls, and mighty rivers. This area, known as the Amazonas region, is home to the “warriors of the clouds,” the Chachapoyas. This ancient culture known for being mighty shamans, powerful warriors, and extensive builders put down roots in this corner of Peru around 700 AC and thrived until the 16th century. During AdventureWeek Peru, my group of 14 people from seven countries discovered the deep history and ongoing stories this intriguing corner of the country has to tell.

Over the course of our five-day visit, Roger, our 27-year-old guide, shared his life stories, showed us where he grew up and played as a child, and introduced us to his mom and dog, Braco. Roger spent his childhood in Kuelap, one of the best-kept secrets of Peru, a beautifully preserved and enigmatic ancient fortress, three times older than Machu Picchu, where more than 5,000 Chachapoyas used to live. Roger and his cousin Samuel were our guides through a million years of history, describing every single detail to us. We marveled at the tremendous view from the top of the mountain for hours and encountered very few people — a true privilege! 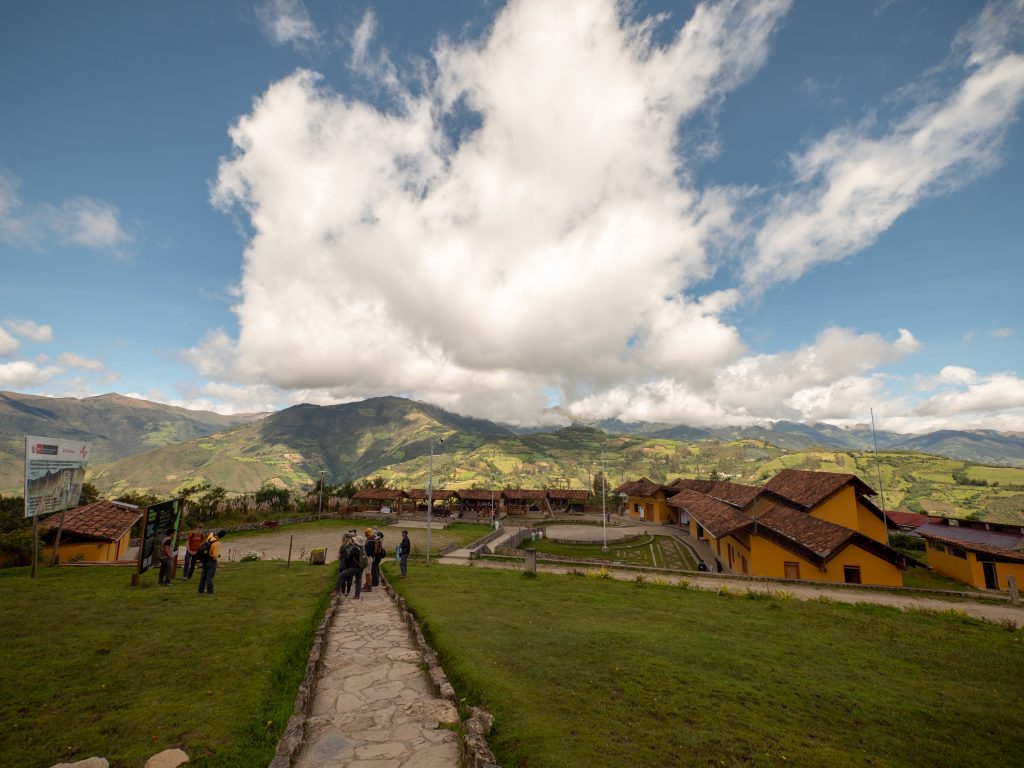 The Amazonas region is rich in Peruvian history and culture. © ATTA / Matt Corliss

The Amazonas region’s story continued to unfold when Roger took us to the magic village of San Bartolo. The rural village has a calming vibe and a sense of simplicity, which encouraged us to slow down — even those of us who usually don’t know how! We’d been walking for an hour or so through astonishing green landscapes among happy, free-range chickens when a local lady invited us into her home. She explained how locals built their clay homes and sent us on to continue our journey only after we promised to stop back to enjoy the eggs and potatoes she wanted to prepare for us in her wood stove.

Continuing our walk, we came close to the mausoleums of Revash, located in a cave on top of limestone rocks. With the discovery of mummies and some artifacts, archaeologists concluded these were the final homes of prestigious Chachapoyas ancestors. As we made our way back, we stopped for a restorative break at our friend’s home, where those potatoes and eggs were waiting for us.

To add another chapter to the area’s story, Roger invited us into one of our most authentic experiences yet: a stop at the home of a grandma dueña Clotilde Alva. For 30 minutes, we sat immersed and mesmerized by her process as she made five different clay pottery items, hypnotized by her fast hands and soft voice. Her daughters and nieces are carrying on her story, following her path with pride; this wasn’t the case 10 years ago. It was gratifying to hear that tourism is helping to keep their traditions alive.

No trip through the Amazonas region is complete without trying the local dishes: aguardiente, coffee, cacao, and a fruit called purpur that’s endemic to Peru. I didn’t find it surprising the food was undeniably delicious — this is Peru, after all — and the Amazonas specialties are truly delightful. One of my favorites is called juane, which consists of a bowl of rice filled with meat, boiled egg, black olives, and spices, all wrapped up in bijao leaves (which look like banana leaves) and then boiled in clay pots and served. My mouth waters just thinking about it!

All this food, of course, calls for movement. So off we went for a picturesque, exciting 12-kilometer hike through the cloud forest. Beautiful flora and fauna led the way toward the bottom of Gocta Falls, which is actually two waterfalls with a combined height of approximately 770 meters. It is not just the height that is impressive, but this is a very well-preserved area, still relatively untouched by tourists. As we hiked, a local woman, 71-year-old Paula, passed us going in the other direction leading a tourist on a horse. She told us stories from the past with a big smile on her face, while we attempted to catch our collective breath.

The Amazonas region of Peru encouraged me to reconnect with my inner curious child. I felt an emotional tug in my heart as I tasted the region’s flavors, wandered its ancient pathways, and was pulled back into the past, like I was an archeologist digging holes and discovering treasures. The region’s story wrote itself as we encountered locals along the way, people who shared their own histories and traditions with me.

As our time in the Amazonas region came to an end, the AdventureWeek participants and I reflected on the impressions our trip left behind. I collected a single word from each person — noted in bold above — defining our experience. Together, we’ve written our chapter of the Amazonas region’s story.

1 Comment to AdventureWeek Peru: An Adventure Told in Two Tales