A key objective of the Adventure Travel Trade Association’s (ATTA) events is to build relationships within the adventure community. One special way we do this is through our Day of Adventure. During the Day of Adventure, delegates are immersed in local adventure activities while getting to know other travel professionals, making it a popular mainstay at events by the ATTA.

Through this networking experience, new relationships and life-long bonds start to form. Consistently, event delegates say that the Day of Adventures was one of the most important components of their event experience. An outside adventure, experienced with an amazing group of people, is the ideal way to break free of the stresses of day-to-day business lives and get in the right mindset to collaborate, share, network, and be inspired during the event. We often say that our events are not just events – they’re experiences.

The adventures lined up for this year’s AdventureELEVATE 2022 (3-5 May) in Eugene, Oregon, are perfectly designed for meaningful connection and fun. Crafted by experienced tour operators in the Eugene, Cascades & Coast region, the day will feature four distinct regions: Coast, Eugene, Willamette Valley, and the Cascade Mountains. With 16 different trips available and there is something for everyone.

Join us AdventureELEVATE and you’ll be able to experience the Eugene region at no additional cost. Just announced, the Eugene, Cascades & Coast and ATTA teams have collaborated to give all delegates free access to half-day and full-day adventures with your registration.

If you’re not able to join us in Eugene, we encourage you to check out the following adventures and the operators who run them. They will provide you with ideas for experiences you can have when you take your next trip to Eugene, Oregon, or the U.S. Pacific Northwest. 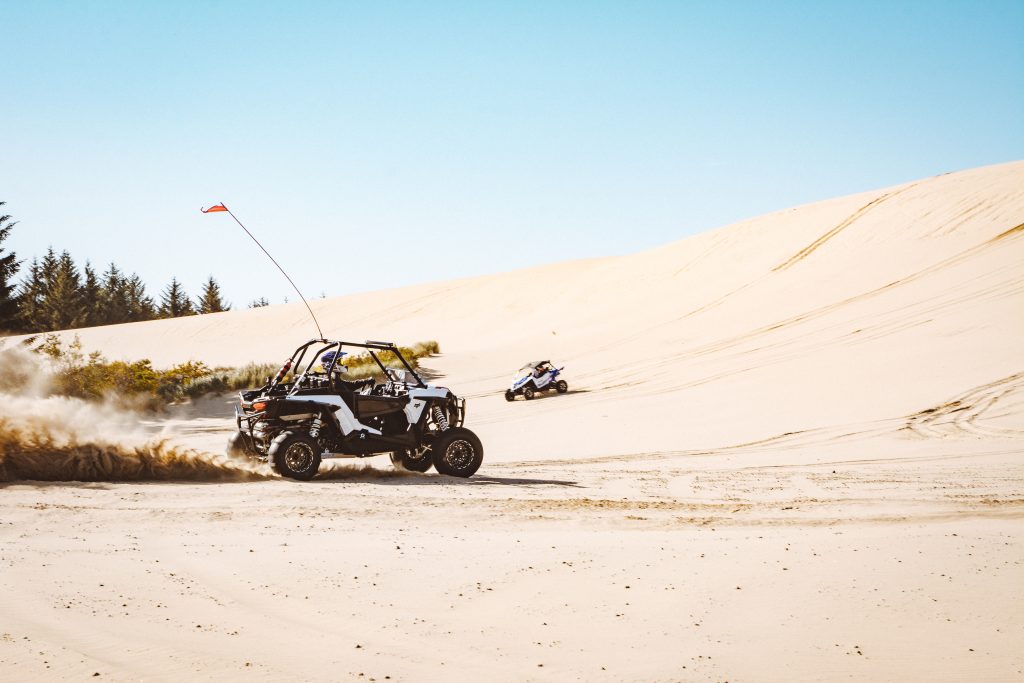 Oregon Coastal Tour – Eugene to Yachats – A relaxing scenic driving tour up Oregon’s world-famous coast with amazing Pacific Ocean views including a stop at Sea Lion Caves – the largest sea cave in North America, camera-ready views of Heceta Head Lighthouse, one of the most photographed lighthouses on the West Coast, and a stop in Yachats, Oregon (pronounced Yah-Hats), a charming small coastal town.

Horseback Riding & Hiking – Take in the beauty of sandy beaches and rocky cliffs on the Oregon Coast. The journey begins at C&M Stables with a horseback ride through forests and wetlands, before emerging onto the open beach. After the ride, hike to the views at Heceta Head Lighthouse. The short but steep trail leads up from the beach, past the lightkeepers’ house, and on to the lighthouse itself where you’ll find some of the most breathtaking views on the Oregon Coast.

Sand Dunes Adventure – Buggies & Boards – Journey to the Oregon Dunes National Recreation Area for some high-energy adventures! These towering hills of sand stand as high as 500 feet and cover more than 50 miles of Oregon’s Central Coast.

Siltcoos River Kayaking (Flatwater) – Have you ever wanted to undertake a source-to-sea paddle?  Want to experience the full length of a river, but don’t have weeks to commit to a full expedition? Look no further than the Siltcoos River in Oregon’s Sand Dunes!  This short river flows less than 4 miles from its source at Siltcoos Lake out to the Pacific Ocean. 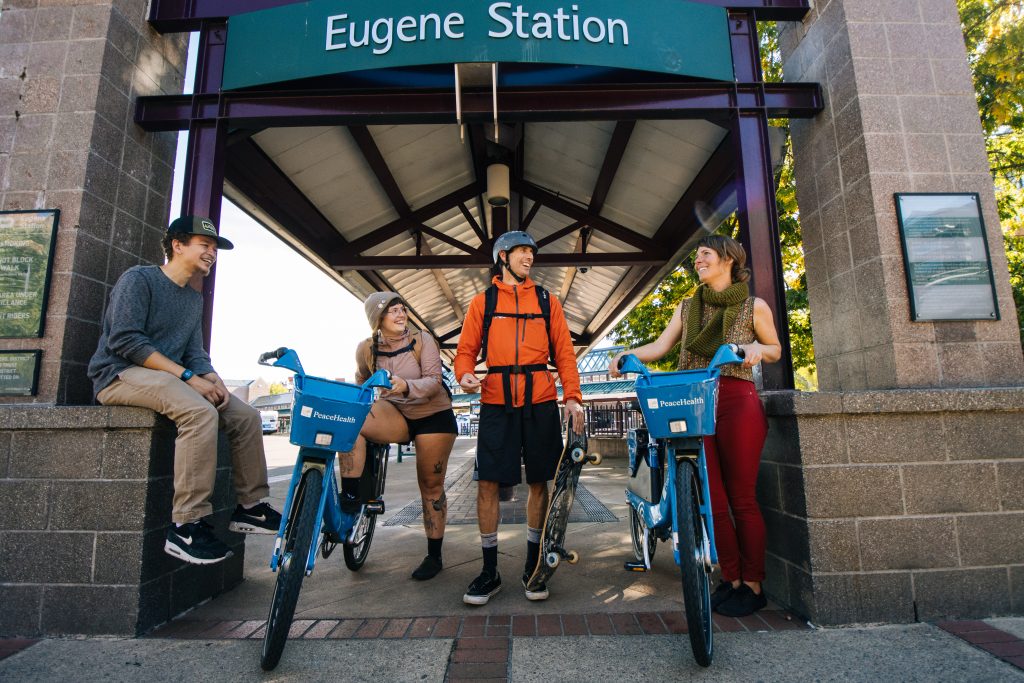 Walking Foodie Tour – Eugene may be known for sports and the University of Oregon Ducks, but this college town is now being recognized for its growing culinary scene. Experience startup food carts and well-established restaurants offering the best of the bounty of Oregon, with many local ingredients grown right here in the Willamette Valley.

Trail Running & Willamette River Float – This combination trip showcases two fun activities in the Eugene-Springfield metro area. First, drive to the Howard Buford Recreation Area, featuring Mt. Pisgah Arboretum and almost 20 miles of hiking trails. Then meet local Olympian Ian Dobson for an invigorating trail run around the base of Mt. Pisgah. Finishing in a 12-passenger pontoon boat for a relaxing float trip. There’s plenty of wildlife to see on the way to Island Park in downtown Springfield.

Peace Health Bikes Around Eugene – Is there a better way to see a new city than by bicycle? Eugene, Oregon holds a gold level rating from the League of American Bicyclists, and this trip shows what a great community this is for cyclists. Join Cascadia Mobility, a non-profit organization that runs bike-share programs for mid-sized cities, on a two-wheeled tour of Eugene. Approximately 12 miles, starting from downtown, ride past Skinner’s Butte, along Eugene’s fabulous riverfront bike paths, through Alton Baker Park, around the University of Oregon campus before our single (optional) climb up into Hendricks Park, and then back down to Eugene’s Kesey Square; where there are local food carts, restaurants, and breweries. 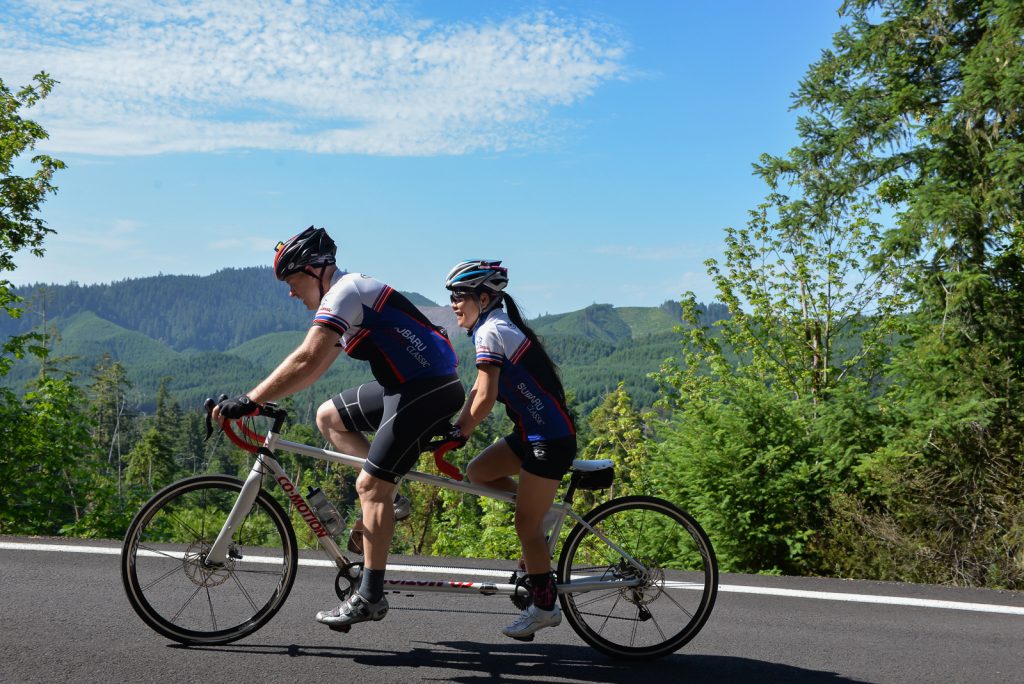 Southern Willamette Valley Wine Country Tour – This relaxing trip is the perfect option for anyone looking to take in the sights (and tastes) of the Willamette Valley without breaking too much of a sweat. The Southern Willamette Valley is known for its Pinot Noir and Pinot Gris, but you’ll find a wide variety of wines on this excursion. Stops include Silvan Ridge Winery, Sweet Cheeks Winery, and end at King Estate Winery, the largest winery in Oregon. Many Oregon wineries, including those on our tour, practice various sustainable farming practices, and many are certified Salmon Safe, organic, or biodynamic.

Willamette Valley Road Cycling – Oregon’s Willamette Valley is exceptional for road cycling, and this ride showcases the highlights for biking around the Eugene area. This ride follows the Willamette Valley Scenic Bikeway route, one of Oregon’s official state Scenic Bikeways. Passing through the charming small town of Coburg, a hub for antiques and local wine. Another 15 miles of riding north brings us to Harrisburg crossing the Willamette River and turning south towards Eugene. The ride continues through Junction City, another hub of agriculture known for its Scandinavian heritage and a stop for lunch at Camas Country Mill – a unique business that grows and mills organic grains, sells flour to various Oregon restaurants, and operates a small bakery on site. The trip concludes with the 15-mile ride back into Eugene, covering more rural county roads and then using the Fern Ridge bike path as you enter the city from the West.

Cycling the Covered Bridges Scenic Bikeway – Did you know Oregon was the first state to launch a scenic bikeway program?  Did you also know that Lane County has more covered bridges than any other county west of the Mississippi River? This 36-mile cycling route, featuring multiple covered bridges, begins in downtown Cottage Grove – a community that boomed during a local gold rush in the 1860s. It has been famously featured in the films Animal House (1978) and Stand by Me (1986). Then ride through downtown before turning onto the Row River Trail, a 17-mile bike/pedestrian pathway built on a former railroad bed following the shores of Dorena Lake. 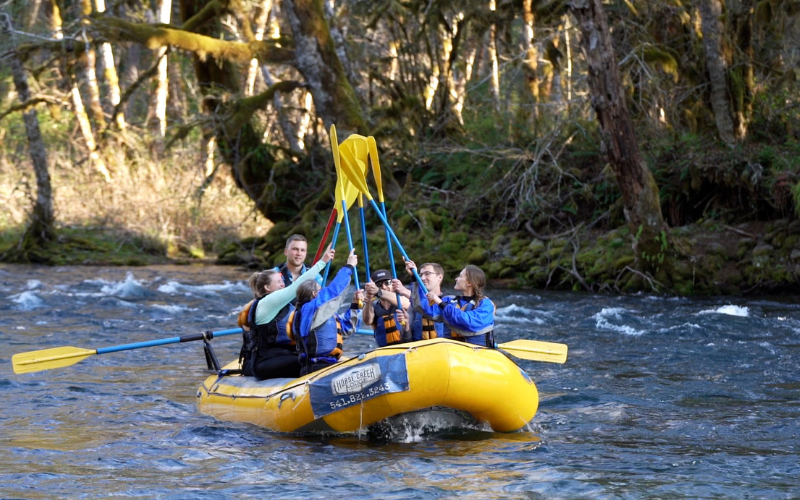 McKenzie River Rafting – Whitewater rafting on the McKenzie River is one of the true gems of Oregon. This crystal-clear river boasts some of the cleanest water in the US as it surges out of the Cascade Mountains. The McKenzie River is perfect for a beginner or experienced rafters alike. With a mix of waves and Class II-III rapids, as well as calmer sections, you’re guaranteed to have a great trip down the river. Don’t forget to look all around you! Not only is the river beautiful, but you’ll also be surrounded by incredible views of the Cascade Mountains and Oregon’s famous forests.

Central Cascades Hiking – We explore one of Oregon’s most beautiful sights – Clear Lake!  This lake was formed approximately 3,000 years ago when ancient volcanoes erupted and filled the valley with lava; blocking the flow of the McKenzie River. The water is at a constant temperature of 34 degrees Fahrenheit year-round. These near-freezing conditions have preserved trees underneath the water, which have not decomposed and are still visible after thousands of years. The hike around Clear Lake is mostly flat but traverses different types of terrain including through forests and in more exposed lava rock sections. Clear Lake is located more than 3,000 feet above sea level.

Regenerative Tourism & Mountain Biking – As growing numbers of travelers are looking to positively impact (or at least lessen the adverse effects of travel) on the communities they visit, several Oregon-based operators have begun producing Regenerative Tourism packages. During this informative trip, experience a condensed single-day version of these packages, led by the organizations that developed the concept in this region.

Middle Fork Willamette Rafting – Raft the upper reaches of the Willamette River through the beautiful Willamette National Forest. This trip begins in the town of Oakridge, the Mountain Biking Capital of the Pacific Northwest – but you’ll see why the Middle Fork of the Willamette River is another fantastic recreational asset in the area. This section of the river features Class II+ whitewater along a five-and-a-half-mile trip. The river access is at Oakridge’s Greenwaters Park, which also connects to networks of trails in the National Forest. Float past relics of Oakridge’s timber heritage while marveling at the natural beauty that gives this community new life as an outdoor recreation hub. If the weather is clear, you can see Diamond Peak; still snow-covered in early May. The trip continues through more forested stretches before ending in the nearby town of Westfir, the home base of our guides today – the Westfir Lodge & Cascades Outdoor Center.