Adventure professionals from around the Northeast met in Boston, Massachusetts, to celebrate World Tourism Day during an AdventureConnect on the evening of Thursday, 27 September. The event featured a panel called Leading the Way in which four women who own and operate distinguished adventure travel companies spoke about their work in the industry.

During the discussion, Robin Pollak of Journeys International, Lauren Hefferon of Ciclismo Classico International, Erica Landerson of Adventure Women, and Judi Wineland of Thomson Safaris shared stories about how they got into the adventure business and what they think the biggest challenges are for women in business today. The four freely shared their passion for adventure travel and their strong beliefs in the important roles women play as leaders in this dynamic and constantly changing environment. 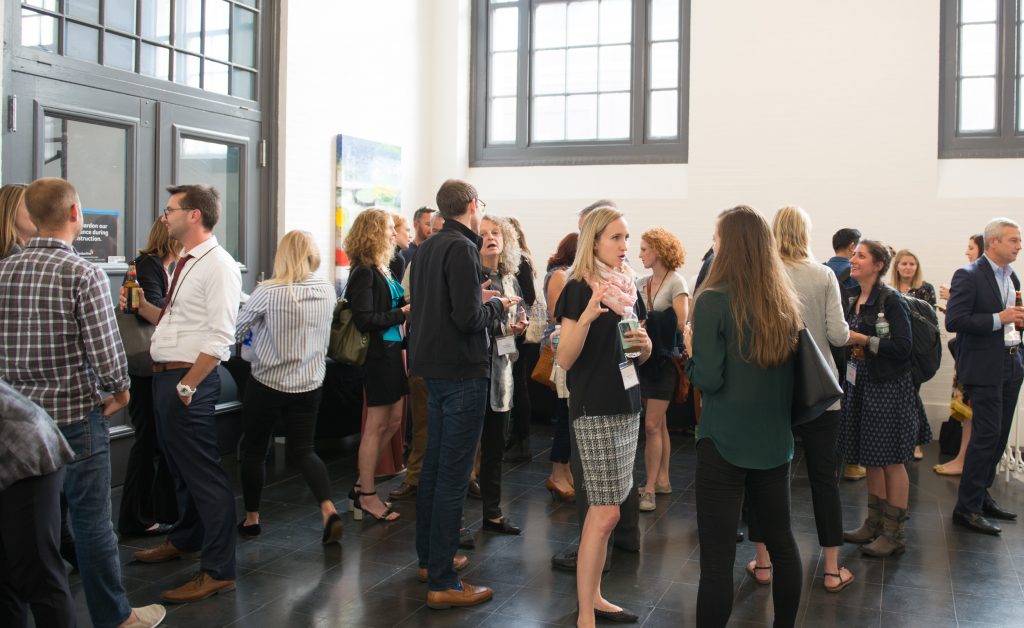 Participants at the AdventureConnect had plenty of time for networking after the Leading the Way panel discussion. © 829 Studios

The panelists all took different paths that led them into adventure travel. Pollak, who has traveled extensively her whole life, took over her parents’ company in 2013, while Wineland discovered the allure of international travel at 20 years old and established her first travel company in 1978. Wineland and her daughters, Landerson and Nicole Wineland-Thomson, purchased AdventureWomen in 2016 and run the company as a partnership. Hefferon decided at an early age that her career would involve her cycling passion in some way and grew Ciclismo Classico International organically as she introduced cycling itineraries in Italy; her company is celebrating its 30th anniversary this year.

“The success of what came about for me was this whole idea of ownership,” Wineland said, pointing out that each of the women on the panel focused their business efforts in areas for which they had passion. “I really honed in — we all honed in — on the things we were passionate about and loved and mine was Tanzania,” she said, which tends to be her company’s present-day focus.

This theme of passion resurfaced a few times throughout the discussion, and while an obvious love for travel is a major motivator for their businesses, interacting with people — particularly women — also feeds that passion. Wineland spoke about how her passion has evolved over time and is now focused on elevating other women. “What is really wonderful as a woman is empowering other women,” she said. “There are women around the world who are a part of these communities who would really love to have a helping hand and I’m very committed to that.”

Though they work in an industry that emboldens their passion, as female business owners they do face occasional challenges. “In general, I think there are hurdles for women across the board,” Pollak said, noting that what women working in adventure travel face is likely similar to what women in any industry may encounter, such as differing communication styles. “The challenges specific to women, for me, have not been particular to adventure travel.” To cultivate emerging talent in the industry, Pollak said she believes the best thing for women is to hold both men and women to high standards and cultivate the skills they need to maintain those standards. Landerson said she thinks some women might perceive a difficult barrier to entry but that they should pursue their interests. “You just have to go out and try it and do it,” she said.

Family has played an important role in many of these women’s lives as they’ve navigated the business ownership landscape. “What really spoke to me was the fact that I was going to be with my mom and my sister doing this, and that it was about empowering women and getting women together to go travel,” Landerson said about her decision to enter the business with family members. “That really spoke to me.”

After a lively Q&A session, participants had a chance to network with other attendees.

This was the Northeast’s first AdventureConnect in more than four years. It was supported by Travel Massive and Impact Travel Alliance. Dineke Bernier, project manager for 829 Studios, coordinated the event onsite and Peter Ross of 829 Studios served as host for the evening.