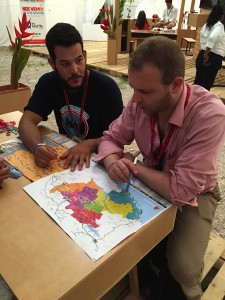 From August 26 to 29, Palenque, Chiapas became the host of ATMEX 2015. The 4th Adventure Travel Mexico conference saw over 1,100 visitors including 151 Mexican buyers, 73 international buyers, 84 domestic and international members of the media and 15 speakers.

For five days prior to the official conference, hosted buyers and media had the opportunity to experience Mexico first-hand on one of 14 Pre-ATMEX Adventures in the states of Morelos, Guanajuato, Tabasco, Mexico City, Oaxaca and of course, Chiapas. The trips offered a wide range of adventure activities, from bird watching and hiking to mountain biking the Sierra Norte trails and rappelling waterfalls to an urban adventure in the heart of one of the biggest cities in the world, Mexico City. 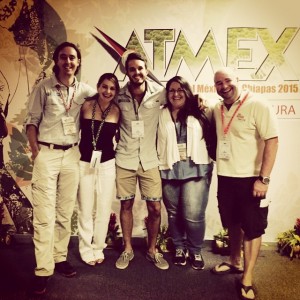 “Who knew there was so much adventure in Mexico City!” said one participant. “All I had thought about it was that it was just another big city. From the ruins of Tenochtitlan to the canals of Xochimilco to bike riding on the Paseo de la Reforma on Sunday morning, to the Museum of Archaeology, I was thoroughly fascinated with the city.”

When they returned from their adventures, attendees were welcomed in Palenque for the official beginning of ATMEX. This year, the academic program meant to showcase how adventure tourism can help create a balance between traditional tourism and alternative tourism, between conservation of natural resources and economical gains, between culture preservation and standardization, between technology and the soul. The presentations covered storytelling and adventure travel for women, the psychology of Adventure Travel, product development, building indigenous tourism, guide capacitation and developing community tourism.

The 3 keynote speakers presented successful cases that exemplify the duality mentioned above, and how this duality is being addressed every day with hard work and passion. The first keynote, “Maximizing the Value of Aboriginal Tourism through Public-Private Partnerships” by Keith Henry, told attendees about the revitalization that aboriginal cultures across Canada are experiencing through the development of close partnerships between the aboriginal tourism industry and the provincial and federal governments, giving communities the means and will to build strong businesses to celebrate and share their cultures and traditions with visitors. 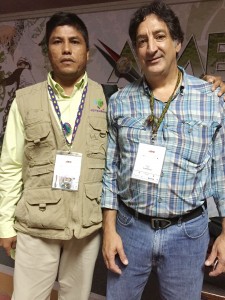 In the second keynote, Tullio Bernabei took ATMEX guests through a quick trip via his passion, speleology, and shared with the audience the project to rescue the “Christmas Tree” — a waterfall whose main conduct of water, a cave in the Sumidero Canyon, has been damaged by deforestation in the area.

Rafael Gallo closed the academic program in the third keynote, sharing the case of Ríos Tropicales, a Costan Rican company lead and owned by Rafael to protect, educate, conserve, reforest, and support local communities through his model of engaged citizenship in planet earth. After 30 years of working tirelessly, Rios Tropicales protects over 2,000 acres (800 hectares) of primary and secondary rainforest, and with the support and involvement of local communities and organizations, has planted over 20,000 native species of trees to mitigate over 12,600 thousand tons of carbon annually over the past two decades.

To balance the academic program with business, Marketplace was held on both August 27 and 28, resulting in over 3,000 meetings between representatives from Mexico, United States, Russia, Canada, Argentina, Peru, Colombia, Brazil, Portugal and Spain.

ATMEX 2015 presented many lessons learned and many challenges still to overcome for the adventure tourism industry in Mexico. As the ATTA’s Rebeca Yañez puts it:

“Mexico is a reflection of a country with extreme contrasts, far from perfection, but exactly what adventure travelers are looking for — untouched nature, the unknown yet to be discovered, the hidden trail yet to be hiked, live and unique cultures fighting hard against homogenization, historic traces everywhere you look at, diverse landscapes — perfect playgrounds for the explorer. Adventure travel in Mexico may be rough, always pushing you to go to remote places to find the perfect spot along bumpy roads with basic infrastructure, sometimes spontaneous and with nothing set in stone, but this is what Mexico is! We are a mix of several civilizations with a great story to tell including our chaotic history and legacy, bumpy landscapes, lush and diverse nature, and a culture very much ALIVE! Adventure travel is the only way you can hear the full story.”