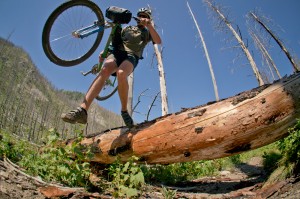 “Adventure Cycling has always been on the cutting edge of long-distance bicycle routing in North America,” said Cartographer Casey Greene. “The Idaho Hot Springs Mountain Bike Route continues this trend by incorporating backcountry singletrack options into a route, which is a first for us. It’s also something that our members have been asking for, and with the innovative new bikepacking gear and techniques that have surfaced over the past 10 years, it seemed like the perfect time to develop this kind of route.”

Based on the growth of bikepacking and the popularity of its Great Divide Mountain Bike Route, which traces the spine of the Rocky Mountains from Canada to Mexico, Adventure Cycling anticipates that cyclists touring the new Idaho route could represent a robust tourism niche for the communities along its corridor: the major city of Boise, as well as the smaller towns of Idaho City, Stanley, McCall, Cascade, Atlanta, Crouch, Garden Valley, Lowman, and Placerville. This region also offers all the key ingredients of a popular bike-touring destination, including quiet roads and some of the most spectacular country the West has to offer, from blue-ribbon trout streams to big sub-alpine terrain, and cozy mountain towns; not to mention, the hot springs. 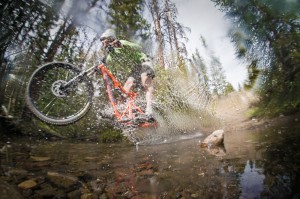 “There are few things I’ve found that go together as well as a day of backcountry bicycling followed by a relaxing soak in one of nature’s own hot tubs,” Greene said. “Those who’ve never experienced it are in for a real treat.” A handful of the hot springs accessible from the IHSMBR are commercial, including Burgdorf, Goldfork, and Twin Springs; the majority, however, are primitive and undeveloped. The route’s location is also ideal for integrating myriad other recreational activities such as fly-fishing and white-water rafting into any itinerary.

“Central Idaho contains some of the largest wilderness areas in the Lower 48,” said Michael McCoy, route researcher for the Great Divide route and a 19-year resident of the Gem State. “If you’re set up for it gear-wise, it would be easy to stash your bike in the woods and take a backpacking trip into the alpine lake-abundant Sawtooth Wilderness, or in the spectacular Frank Church-River of No Return Wilderness.”

Another option, McCoy noted, is a commercial float on the Salmon River, the storied River of No Return. “When you’re at the northernmost tip of the Idaho Hot Springs Mountain Bike Route’s Secesh singletrack option, as the crow flies you’re only about ten miles from the Salmon. It’s a bit farther to ride or drive there, but still doable. From McCall, located on the main route, it’s less than 50 miles to Riggins, a popular put-in spot for day trips on the river.” The Idaho Hot Springs Mountain Bike Route is offered as a two-map set. The first map section features the main, off-pavement route — a loop route that primarily follows dirt roads for 518 miles, with a few stretches of pavement in the mix. Cyclists planning a trip on the main route need only to have a basic understanding of mountain-bike riding technique. However, cyclists attempting any of the four singletrack options, featured on the second, supplementary map section, should know their own ability and prepare for challenging conditions. Some sections of the singletrack are expert-only riding (or hike-a-biking for those who aren’t experts).

Out-of-state cyclists can access the IHSMBR via a 33-mile spur from the Boise airport, which is shown on the main route map. Flying into the Sun Valley-area airport is another option. From Friedman Memorial Airport, located in Hailey, cyclists can connect with the route in Ketchum, 14 miles north, by way of the Wood River Bike Trail, though this connection is not represented on the Adventure Cycling maps. Once they reach the route, riders will enjoy its rural nature with relatively little traffic and resupply points strategically located along the way.

When planning their tour, cyclists should time their itinerary with the seasonal sweet spot for Northern Rockies backcountry travel: after the snow has melted up high, but before wildfire season starts — sometime between late June and late July. Autumn can be another good time for a trip, with its cooler nighttime air temperatures, which make the route’s numerous hot springs all the more inviting. For an autumn excursion, cyclists should shoot for early September to mid-October.