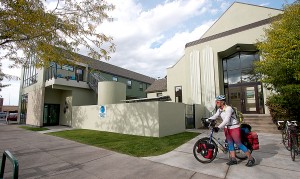 “Adventure Cycling continues to benefit from the surge of global interest in bicycle travel,” said Jim Sayer, executive director of the organization. “We are being asked by cities, states, and provinces all over North America how they can attract more bicycle tourism and we’re hearing from many businesses that want to get more involved in this thriving sector.”

The organization welcomed 276 new life members, more than double the number of those who joined in FY12, bringing the total number of life members to 2,288. Adventure Cycling’s life-member program is a very popular way to support the organization; funds from life memberships are restricted to provide long-term support for the nonprofit. In the past, life-member funds helped purchase Adventure Cycling’s headquarters and last year, helped complete its expansion and renovation. 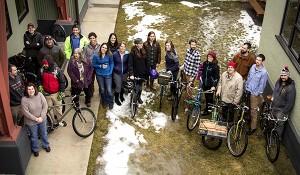 Adventure Cycling Association staff posing with their bicycles in their courtyard. Photo by Rachel Stevens

Adventure Cycling Association’s 46,724 members come from every state in the U.S. with the most members residing in California and the fewest in North Dakota, 1,636 live outside of U.S. with 55 countries represented. From Austria to the United Arab Emirates, with Luxembourg, Malaysia, Slovakia, and Malta in the mix, members reside and travel all around the globe.

Published nine times each year and reaching more than 100,000 readers annually, Adventure Cyclist features bicycle-travel stories and photographs from around the world, how-to information, gear and touring-bike reviews, and more. Adventure Cyclist is the association’s primary member benefit, along with discounts on maps and access to tours and instructional courses.

Adventure Cycling experienced another record-setting year in tour signups, offering more than 70guided cycling tours. By the end of the season, 1,360 cyclists rode with Adventure Cycling on tour, a 6% increase in participation over 2012. The tours are unlike most offered on the travel market, with a mix of self-contained tours, supported trips, and educational courses.

In August 2013, research was completed on an exciting new mountain-bike route in Idaho. Adventure Cycling’s Idaho Hot Springs Mountain Bike Route will be a 608-mile route with four singletrack options (totaling 227 miles). A spur from Boise to the route is also included. Maps will be available in early 2014.

Also, design layout and mapping began for Adventure Cycling’s next long-distance route, Bicycle Route 66. The complete route will be approximately 2,500 miles in length. Maps will be available in 2015.

The organization’s popular bicycle-touring maps are available from its Cyclosource store and catalog. In 2013, after four record years in a row, Adventure Cycling saw a slight decline in map sales, down 2%, with overall sales income dipping 1% below FY12. Over the last decade however, the organization’s map sales have grown 42%, with overall sales growing a whopping 80%.

In FY13, Adventure Cycling saw a small decline in charitable contributions, which totaled $662,094, after a record-breaking FY 2012, which included a special campaign to support the expansion of Adventure Cycling’s headquarters. Foundation funding increased nearly $55,000 over FY12, to $72,463, with renewed support from the Tawani Foundation, the Lazar Foundation, New Belgium Brewing, Climate Ride, the American Association of State Highway and Transportation Officials, and the Stephen M. Seay Foundation. Members gave an impressive $149,448 to meet an $86,000 match challenge during the organization’s holiday campaign. Members, major donors, and businesses gave $128,346 during the U.S. Bicycle Route System campaign in May 2013, also National Bicycle Month.

“Bicycle touring is an evolving and growing activity among people of all ages,” said Development Director Amanda Lipsey. “We look to our members to help us keep up with the demand for our programs, services, and resources by supporting us financially, and we are very grateful for their enthusiastic and generous support.”

Adventure Cycling invests the net proceeds from its membership dues, donations, and earned income activities in programs that inspire and empower people to travel by bicycle. In FY13, these activities included a completely revamped organizational website and blog, an expanded website devoted to bike overnights (1- to 2-night bicycle trips), advocacy efforts to improve bicycle-travel conditions throughout North America, outreach efforts to promote bicycle tourism, and staff support for the creation of the U.S. Bicycle Route System, which will eventually be the largest official bicycle route network in the world.