Founded by photographer Michelle Valberg, Project North enhances the lives of Inuit youth by bringing the power of play to northern communities 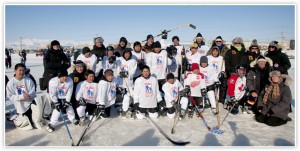 Port Credit, ON – Adventure Canada is delighted to announce its continued commitment to Project North in 2014. Spearheaded by award-winning Canadian photographer Michelle Valberg, Project North is a nonprofit organization that creates and contributes to projects that improve education and offer fitness and recreation opportunities to Inuit youth in remote Canadian communities. Last fall, Adventure Canada delivered 25 bags full of new ice hockey equipment to Makkovik, Labrador. The donation, valued at $25,000, was a joint contribution by Adventure Canada, The NHL Players’ Association and Project North. 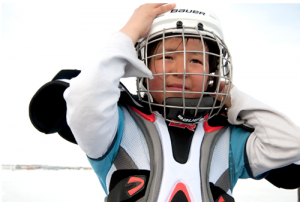 “We in Makkovik are so grateful for the tremendous generosity of Project North and Adventure Canada,” said Randy Edmunds, Member of the House of Assembly for the Torngat Mountains. “Rest assured that the 25 full sets of hockey gear will be put to great use by the community. Recreation plays such a huge role in all communities in Labrador.”

The equipment came at a great time – Makkovik plans to open their first indoor hockey rink next year.

This year, during its Northwest Passage: East to West cruise, the well-respected expedition operator and Project North plan to deliver ice hockey equipment to Grise Fiord, Canada’s northernmost community located on Ellesmere Island, in Nunavut, Canada. Without this support, outrageous transport costs to the isolated community would restrict safe delivery of the donated gear. 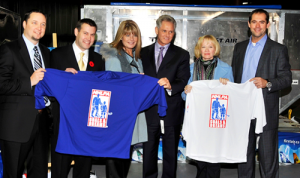 “Adventure Canada would like to thank our entire expedition team, Michelle Valberg, treasured clients, Leslie Coates and Sheldon Rice along with countless Project North supporters for graciously contributing to our efforts to bring hockey equipment to the community of Makkovik,” said Cedar Swan, Adventure Canada Vice President. “We are excited to support the power of play in more Northern communities in 2014 and beyond.”

You can also be a part of the Project North dream. Visit projectnorth.ca to get involved or purchase a piece of equipment for a northern community.