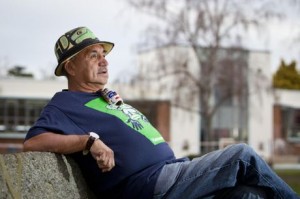 George Me’las Taylor, Canada, outside the Hastings Civic Square where he will be part of a dawn ceremony revealing 19 pou on Friday.

An interested international observer will be present at the dawn unveiling of 19 pou, or carved figures, at the Hastings Civic Square on Friday. George Me’las Taylor grew up on the Namgis Reserve in Alert Bay, British Columbia where the highest honour for indigenous people is being represented on a totem pole.

Mr Taylor was invited to be part of the celebrations. The pou, similar to the totem poles, each represent an ancestor from 19 marae in the Heretaunga district involved in the project. It will also signal the beginning of the redevelopment of civic square in a partnership between the Hastings District Council and Nga Marae o Heretaunga.

“Where I am from, the totem poles represent our life form,” Mr Taylor said. “I am represented on a totem pole which is the highest honour for our people. It represents who we are and our history which goes back 10,000 years within our beautiful country of Canada.”

Mr Taylor who is a director of Aboriginal Tourism of British Columbia said it was an honour to be allowed to perform a special ritual which will be his way to recognise ancestors represented by the pou.

It was his third visit to New Zealand but his first time to Hawke’s Bay, where he hoped to establish a long-term connection between the region and the tourism agency he represented.

“We have so many similarities between our culture and Maori culture, in terms of our way of life, the way we conduct ceremony, our languages between our tribes.

“Our CEO of Aboriginal Tourism BC is very excited about me being here and I believe a long term connection has already started. Potentially, there’s scope for cultural exchanges which are very important …”

Mr Taylor’s background is in the performing arts and he continues to lead the Le-La-La Dancers Society he formed in 1987. “We had brought dance groups from the South Island to Vancouver and I would be happy to connect with the North Island to do the same.”

Mr Taylor described the communities of Hawke’s Bay as “very friendly and very open”. He expects the dawn ceremony to be “something historical. When you bring to the attention of people, the history of the ancestors, it is something which should be recognised and honoured.”