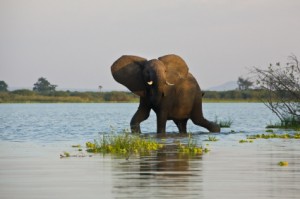 Editor’s Note: Unfortunately, it doesn’t seem like the travel industry has yet fully awakened to the massive changes that are likely to result to the environment and ecosystem in Tanzania and elsewhere in Africa due to the events described in this guest post from Friends of Serengeti. Please take a moment to read this article and pass along.

Tanzania’s Ministry of Energy and Minerals has granted a license to mine uranium in the Selous Game Reserve, a UNESCO World Heritage Site of “outstanding universal value,” to a major international mining company. According to the website AllAfrica, the move will catapult Tanzania ahead of Canada as the world’s second largest uranium producer. Read the full story here.

This comes after the decision last summer by the UNESCO World Heritage Committee to allow Tanzania to alter the boundaries of the reserve in order to pave the way for uranium mining.

Why the Selous Matters

Covering over 21,000 square miles, the Selous is one of the largest protected areas in the world and is one of Africa’s last great wildernesses. Until recently, it has been relatively undisturbed by humans, though another plan is in the works to build a hydroelectric dam on the Rufiji River and elephant poaching has become so rampant in recent years that the Selous has been called one of the worst elephant “killing fields” in Africa by the Environmental Investigation Agency.

According to UNESCO, the Selous is “a valuable laboratory for on-going ecological and biological processes” and is “a natural habitat of outstanding importance for in-situ conservation of biological diversity,” because of its high density and diversity of species, including:

While authorities say the plan will affect less than 1% of the reserve, dozens of environmental groups around the world are outraged. They say the mine will produce 60 million tons of radioactive and poisonous waste during its 10-year lifespan, and up 139 million tons if a projected extension of the mine is implemented. According to Uranium Network, “the radioactive wastes pose a serious threat to Selous Game Reserve which is home to the world’s largest elephant population and other wildlife. No proven methods exist to keep the radioactive and toxic slush and liquids from seeping into surface waters, aquifers or spreading with the dry season wind into the Reserve.” 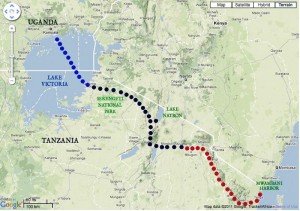 While this development is both sad and alarming, it is not surprising. In the past few years, many other serious threats to Tanzania’s wildlife and protected areas have emerged, including proposals to build a railway and a commercial highway across the Serenget iand a massive soda ash mine on Lake Natron (the breeding ground for over half of the world’s Lesser Flamingos).

Unfortunately, the writing appears to be on the wall for places like the Serengeti, Lake Natron and the Selous: Tanzania’s government seems hell-bent on turning a quick profit by extracting and developing the country’s resources as quickly as possible, at the expense of its irreplaceable wild places and things.

This is not to say that it’s an easy decision, or that the $448,000,000 in revenue and 1,600 jobs that authorities claim the mine will produce are insignificant, especially for a developing country like Tanzania. But in light of the recent histories of  ”resource cursed” African countries like Nigeria and Equatorial Guinea, it’s hard to be optimistic that the economic spoils of the mine  will trickle down to ordinary Tanzanians. In these countries and others, vast oil and mineral wealth has created a legacy of horrific environmental degradation, corruption, violence and currency devaluation.

(Note:  The U.S. Geological Survey has estimated that more gas lies off the shores of Kenya, Tanzania and Mozambique than off Nigeria, Africa’s biggest energy producer. Nigeria is Africa’s third biggest economy and ranks 31st in GDP worldwide. Yet it ranks 153 on the Human Development Index Scale out of 170 nations. 70% of its inhabitants live below the poverty line and half of its 160 million citizens survive on less than $2 per day.) 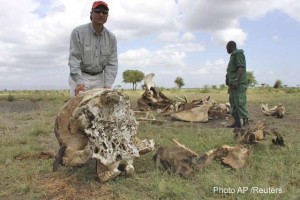 It is estimated that 10,000 elephants a year are killed by poachers in Tanzania

The Role and Importance of Tourism

Of course Tanzania is not Nigeria and perhaps it will escape unscathed from the worst of these tragedies. Even so, there is little doubt that Tanzania’s tourism industry,  which employs over one million Tanzanians and is the country’s second highest foreign exchange earner, will suffer greatly if the country continues to abandon its admirable legacy of conservation. If the Serengeti and the Selous cease to be world class nature destinations, tourists will simply stop coming, many good people will lose their livelihoods, and the funding required to manage and protect Tanzania’s parks and reserves will eventually dry up and the poaching epidemicthat is destroying the country’s elephant and rhino populations will only get worse. This may sound alarmist, but an Economic Impact Statement by our sister organization, Serengeti Watch, based on a survey of international travel providers, concluded that if the trans-Serengeti commercial highway is constructed, it will reduce Tanzania’s GDP by $545 million and cost 193,000 jobs, due to lost tourism revenue.

What You Can Do

While we couldn’t stop the uranium mine in the Selous, there are still many important battles on the horizon. Just last month, China’s new president, on just his second state visit since taking office, arrived in Tanzania to reaffirm his country’s commitment to funding several massive new development projects, including a new $10 billion port project in Bagamayo, north of Dar es Salaam. Philip Marmo, Tanzania’s ambassador to China, has said that the zone will include a highway linking Tanzania’s interior and land-locked neighbors to the coast. Whether or not this highway will bisect the Serengeti, a project that experts have predicted would lead to the collapse of the world famous Serengeti migration, is unclear at the moment. What is clear is that people who care must band together and make their voices heard. Here are a few things you can do:

Collective ignorance is perhaps the greatest threat of all. If more people understood what is happening (and what may happen yet) in Tanzania, the outcry would go a long way towards holding its leaders accountable for making far-sighted and wise decisions. An easy way to stay informed is to follow Serengeti Watch on Facebook. They stay abreast on what’s happening in Tanzania and post frequent updates.

There are many great conservation organizations working to protect Africa’s natural heritage. Join one of them and give what you can. Serengeti Watch, for example, has been instrumental in raising international awareness about many of the issues described above and provides funding and support for the African Network for Animal Welfare’s court case seeking an injunction against the Serengeti Highway. By becoming a Serengeti Watch member, you’ll join thousands of other concerned citizens around the world, make yourself heard, and make a difference. You can also sign up for alerts through organizations like Avaaz and Care2, which often host petition drives focused on conservation issues in Tanzania and beyond.

If your company is involved in Tanzania tourism, become a member of Friends of Serengeti. We are an association of international and East African tour operators and accommodations actively working to protect the Serengeti and East Africa’s other wild places. Or, if you are considering going on an African safari, you can show your support by traveling with a Friends of Serengeti member. They have made a substantial commitment to supporting our mission. So by supporting them, you will be supporting our efforts as well.