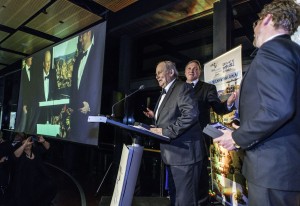 The best of the best tourism and hospitality businesses in the Blue Mountains, Lithgow and Oberon region for 2014 were revealed at the annual Blue Mountains Lithgow & Oberon Tourism (BMLOT) Awards of Excellence gala dinner and awards night on Friday (August 8).

BMLOT chairman Daniel Myles congratulated all finalists and said he was determined to return the nation’s first tourist destination to its Number One tourism position after the October 2013 bushfires although he praised the resilience of the tourism industry.

Recently completed sections of the Great Western Hwy through the Blue Mountains was already making it easier for tourists to visit the region and more experiences, events and attractions would also tempt visitors, he said.

A strong theme of the award winner speeches was team work, with most thanking their colleagues and staff for a collective achievement.

The gala dinner and awards ceremony was held at Scenic World at Katoomba. Scenic World joint managing directors David and Anthea Hammon were emcees and entertainment was provided by Waradah Aboriginal Dancers and the Steve Morrison Jazz Band.

Through the support of Tourism Industry Council NSW and the generosity of sponsors, BMLOT members entered the regional awards for free. All entrants also had the opportunity to attend free submission workshops and category winners will receive free mentoring before the NSW Tourism Awards later in the year.