Assistant Editor’s Note: ATTA member and 2012 Summit Advisory committee member, Ajeet Bajaj of Snow Leopard Adventures, has been conferred the ‘Padma Shri’ – the fourth highest civilian award in the Republic of India – by the President of India, Mrs. Pratibha Patil for his contribution to the adventure fraternity in India. 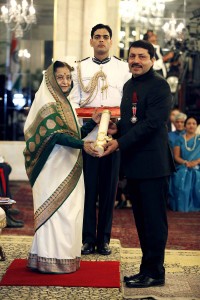 Shri Ajeet Bajaj, an adventurer and explorer, is the first Indian to have completed the much coveted Polar Trilogy comprising skiing to the North Pole, to the South Pole and across the Greenland Icecap. With over 25 years of experience in adventure sports, he is the first Asian to have rafted and kayaked some of the most challenging rivers spanning six continents of the world. Shri Bajaj has done a number of first descents of turbulent rivers in India and is considered a pioneer of river rafting, kayaking and sea kayaking in India.

In April 2006, Shri Bajaj became the first Indian to ski to the North Pole and the first to ski to both the North Pole and the South Pole in January 2007. Braving the most extreme conditions our planet has  to offer, including temperatures going down to (-) 60 degrees celsius, unpredictable weather conditions and blizzards, Shri Bajaj proudly unfurled the Indian flag at the Geographical South Pole on the Indian Republic Day, 2007. In May 2011, Shri Bajaj skied from the west to the east coast of Greenland, skiing 550 kms over 20 days, with ambient temperatures touching (-) 23 degrees celsius, becoming the first Indian to achieve the feat.

Born on September 19, 1965, Shri Bajaj was educated at The Lawrence school, Sanawar and St. Stephen’s college, Delhi. He has won a bronze medal in the national games for kayaking and one silver and two bronze medals in international rafting competitions in Switzerland and Siberia, Russia. He captained the international team for world white water rafting championships in Turkey in 1994. Shri Bajaj has rafted some very challenging rivers of the planet including the Colorado and Alsek rivers (USA), the upper Amazon (Peru), the Zambezi (Africa), the Choruh (Turkey), the Doroa Baltoa ( Italy – first raft descent), the Chuya and the Katun (Siberia, Russia), the Ottawa (Canada), the Inn (Switzerland and Austria) and the Tully, the Barron and the North Johnston (Australia). With extensive climbing experience in the Indian Himalayas, Alps and Africa, he is a qualified climbing instructor from French National School of Alpinism and Skiing. He was the first Indian to undertake sea kayaking expeditions in Greenland, Australia, Kerala and Andaman islands and is certified as an advance open water scuba diver.

Shri Ajeet Bajaj has, as a civilian, served as expedition leader and chief instructor for several river running courses and expeditions for the Indian Armed Forces and special forces. Many of these expeditions were on uncharted rivers in the Himalayas. He was the leader of the first descent kayak expedition on Pare Chu river in Spiti, Himachal Pradesh and the Kundalika in Maharashtra. Shri Bajaj was course director for River Running courses conducted for the National Institute of Water Sports in Sikkim on Teesta and Rangit rivers and kayaking courses conducted for instructors of Nehru Institute of Mountaineering, Uttarkashi. He was the technical Director for International Adventure Challenge 2001 (India).

Shri Bajaj has played an important role in the development of adventure tourism in India and served two terms as President, Adventure Tour Operators Association of India. He chaired the Ministry of Tourism, Government of India, committee for national policy on camping and policy on caravan tourism. Shri Bajaj is a member of the National Tourism Advisory Council and was Chairman, Sub-Committee on Adventure, Sustainable, Wildlife and Eco-tourism for the 11th Plan (Ministry of Tourism). He received the ‘Hall of Fame’ award from the Adventure Tour Operators Association of India in 2009.

Shri Bajaj is an Honorary Director, Himalayan Environmental Trust and a Fellow, Royal Geographical Society. He served on the advisory board for the Adventure Travel Trade Association world summit in Mexico in 2011 and is a member of the Training and Education Workgroup of Global Sustainable Tourism Council, a United Nations World Tourism Organisation. Shri Bajaj is the Managing Director of Snow Leopard Adventures P. Ltd., a National Tourism Award winning adventure tour Company.