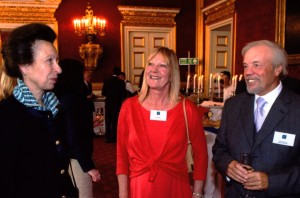 Seattle, WA – Zegrahm Expeditions, the leader in small-ship expedition cruising and overland adventures, is pleased to announce that company cofounder and world’s leading seabird ornithologist, Peter Harrison, has been recognized by the South Georgia Heritage Trust (SGHT) for his conservation efforts.  With the help of contributions from generous Zegrahm guests, Harrison raised more than $150,000 for the eradication of rats on South Georgia Island, where the rodents threaten the survival of sea birds such as albatross, petrels, and prions.  Harrison and his wife, Shirley Metz (also a Zegrahm cofounder and the first woman to ski to the South Pole), were invited to a SGHT lunch hosted by Princess Anne at St. James Palace in London.

“It is an honor to receive recognition for my work,” stated Peter Harrison, cofounder of Zegrahm Expeditions.  “I have always been fascinated by sea birds and wildlife in general, and I have dedicated my life to conservation.  There is much more preservation to be done to ensure these animals will be with us for generations to come. ”

Peter Harrison was born in Plymouth, England.  When not leading a trip for Zegrahm Expeditions, he resides in the US for most of the year.  He also owns and maintains Swingates, a 30-acre private migratory bird reserve in Land’s End, England.