Travellers are invited to assist with building new classrooms in the region at the earthquake’s epicenter. 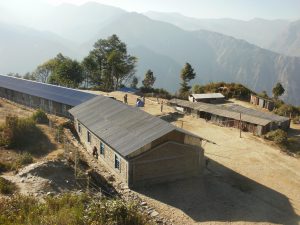 Temporary classrooms constructed at the site of Shree Manjushree Secondary School help accommodate the 365 children affected by the damage.

Adventure travel specialist World Expeditions is marking today’s two-year anniversary of the devastating 2015 earthquake in Nepal with the announcement of a brand new ‘Rebuild Nepal’ project. Taking place in November, the project will assist with building three new classrooms at the Shree Manjushree School in the Kashi Goan village, Gorkha region, which was at the epicentre of the earthquake.

World Expeditions has already helped rebuild classrooms at three schools across Nepal through seven ‘Rebuild Nepal’ projects. Having been operating in Nepal for more than 40 years, and with over 200 trekkers and staff in the region when the earthquake struck, the adventure travel specialist was swift to provide opportunities for travellers to help in a real and meaningful way. 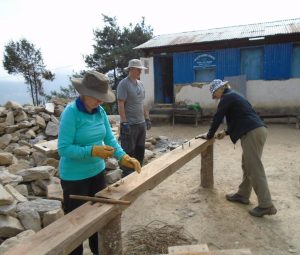 Travellers help to rebuild a primary school in Lura village, in the Solu Khumbu region of eastern Nepal in the fall of 2015.

The new project, exclusive to World Expeditions, will see travellers working alongside locals to rebuild the badly damaged school that was established in 1962 and currently educates 365 students. Spanning 18 days, the trip will also include sightseeing in Kathmandu and a remote, off the beaten path trek from the Langtang region to the Manaslu Circuit. Travellers will cross true wilderness giving them a chance to see red panda, musk deer, bear or even leopard, as they pass through untouched, traditional villages rich in Tamang and Gurung culture.

The worst natural disaster to strike the mountainous, landlocked country for more than 80 years, the 2015 earthquake killed more than 8,000 people, displaced more than two million and destroyed roughly 35,000 classrooms. It also had a negative impact on tourism, the country’s largest source of foreign income.

An opportunity for a small group to leave behind something positive and tangible, Rebuild Nepal: Shree Manjushree Secondary School, Gorkha Region is guaranteed to depart on 25 November 2017.