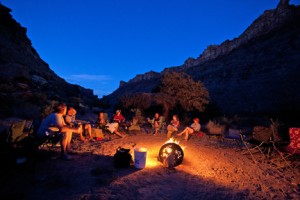 Salt Lake City, UT – Western River Expeditions is hosting a four-day Colorado River rafting trip through Utah’s Cataract Canyon in Canyonlands National Park for up to 25 service women who have experienced emotional or physical trauma from their recent overseas tours of duty. The women-only May 12-15 river rafting trip is sponsored by Warriors on Cataract.

Accompanying the trip will be a crew of women including female Western River Expeditions guides and female support crew who have volunteered to serve on this adventure.

“Many of these women suffer deep psychological trauma and PTSD from rape and assault in the military, and having male soldiers in camp would have a chilling effect.” said Fredrick Solheim who coordinates Warriors on Cataract out of Boulder, CO. Some of the soldiers on past trips have been on suicide watch lists.

“Working with outpatient facilities at medical centers,” Solheim said, “I take the most disabled first. I don’t care about status of discharge. This trip is all about healing. The more disabled they are, the more they gain. If you can come off of suicide watch list, that’s a pretty big jump.”

The program began some four years ago when Solheim, by profession a scientist on contract to the U.S. Navy to build atmospheric sensors, heard a young and disabled Marine interviewed on National Public Radio about his learning-to-ski experiences.

“I’ve been down the river and have seen transformations happen. I knew that combat soldiers are adrenalin junkies and would like big rapids,” said Solheim. “And the support groups spontaneously formed with other combat soldiers goes beyond what the VA can accomplish with their therapy and pharmaceuticals.”  This is his fourth year and he has planned four rafting adventures. He hopes that the river’s healing powers and the adventure and camaraderie on a trip will decrease the number of soldiers on the suicide watch list, and help them to heal and reintegrate into civil society.

“One of the hazards confronting these vets is the feeling of isolation and abandonment, further contributing to depression. We are losing over 8,000 vets each year, dying by their own hand – more than we have lost in the decade-plus of conflict in Iraq and Afghanistan,” he added. “One therapist told me that she had had nine veterans on their High Suicide Risk Watch List, and after the raft trips and some other activities, they graduated all of them off of the list.”

A soldier who sustained six gunshot wounds, 27 surgeries and who was an  Eagle Scout at 14 wrote after a 2013 rafting trip, “On behalf of my Platoon D 3rd Ranger Battalion, I thank you for this unimaginable experience. All of you have helped us in ways I can’t explain. From tracking down lost baggage, to cooking to some of your dietary needs. I personally will never forget this trip, nor my fellow Rangers. This is Paradise outdoors.”