At the Adventure Travel World Summit, the Marketplace & MediaConnect sessions are unique opportunities for travel buyers, suppliers and media to form lasting partnerships. Over one thousand pre-arranged meetings occur during Marketplace and hundreds of four-minute pitches take place during MediaConnect. 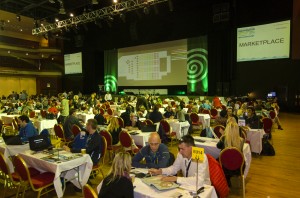 The global Marketplace at this year’s Adventure Travel World Summit featured 134 suppliers and 88 buyers from over 60 countries. Marketplace provides a focused setting for new partnerships to form. Inbound tour operators and destinations make up the suppliers and buyers are outbound operators, travel agents and media. The five-hour session provided the setting for over 1,200 scheduled meetings and an unknowable number of impromptu conversations. Each delegate averaged 13 separate meetings, each lasting an average of 17 minutes.

Marketplace has become a hallmark of the ATTA’s ability to provide networking opportunities for members and potential members.

While usually heavy on representation from North and South America, this year’s Marketplace attracted seven suppliers from Ireland, which helped Europe have a stronger presence than ever. And first-time attendees from the Philippines, Armenia, Japan and Mongolia bolstered the Asia & Middle East contingency.

“I don’t think you’re going to find a more outgoing or gregarious group of people to network with,” said Visit Anchorage’s Jack Bonney, who participated in Marketplace for the first time this year. “Coming is as someone new, it’s been really nice to meet all these people. They’re open in a way not many trade shows seem to be.” 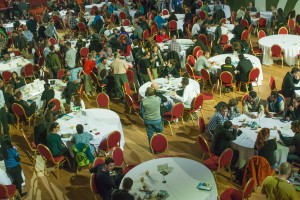 This year we brought back a session we introduced last year in Namibia called “MediaConnect” — a format that mixes insightful media panel discussions with prime networking opportunities for delegates.

In the first panel called “Seed to Story” a writer, an editor and a tour operator took the audience through their experiences of watching an idea turn into a publication. National Geographic Traveler editor Norie Quintos gave specific hints for operators with story ideas for the magazine: “Make it personal, know your angle, and follow directions,” she said. To the last point she said that operators should be careful to note deadlines and be respectful of the magazine’s timelines.

Representing the tour operator perspective, ROW Adventure’s Peter Grubb told the beautiful success story of how his adventure trip to the Balkans with writer Tim Neville ended up in the New York Times. His advice to operators who want that caliber of writers following them around: do your homework and have a nice website. Travel writers know how to judge a book by its cover and they will not take your tour offerings seriously if they can’t get a sense of who you are from your website.

Berne Broudy spoke to the group as a freelance writer. “Writers need an angle,” she said, “We need a hook. Know who we are and figure out what we might be interested in.”

That said, the panel discussion wrapped up and delegates had the opportunity to hold a one-on-one audience with top-tier and emerging members of the travel media. For one hour, media accepted four-minute pitches from delegates. Delegates had done their homework, armed with a MediaConnect packet emailed to them a few weeks before that included detailed biographies of each media and which destinations and types of trips they were interested in. It was their opportunity to do what Broudy said: “figure out what we might be interested in”….in four minutes or less.

Travel writer Yvonne Gordon was able to meet with 28 different companies during MediaConnect. “Many of these had put huge effort into presenting well-prepared pitches and story ideas, tailored not only to what I write about – which includes boating and sailing trips and off the beaten path destinations – but also suitable for the publications and markets I write for,” she told the ATTA. “Not only am I excited to experience these adventures in the near future, but I am already looking forward to be able tell the stories of these adventures to the wider world through my writing and photography. If a four-minute pitch can get a travel writer excited about telling future readers about an adventure they can have, then the job is done.”

When the buzzer sounded on the last four-minute pitch, it was time to take a break and the come back and focus the attention back toward the stage for a panel discussion called “Get Real,” which shed some light on the blurry lines between paid, earned and converged media. Once a story has been pitched to a media outlet and accepted, what becomes of it. Is it a feature, editorial, or advertorial? Is it a marketing campaign? Panel member Eric Hiss calls himself a “converged writer”: part travel writer, part itinerary creator, part photographer, part social media marketer. The nature of the content is evolving and writers need to evolve with it.

“Good travel writing is about matchmaking between a writer and a destination,” says AFAR editor Jen Murphy. “I often get asked, ‘why don’t you write about every trip you take?’,” she said, answering “I’m not always the right writer for the job and my outlet isn’t always the right outlet for the story.” Her advice to operators and destinations is to be creative when you pitch, to know what the story is ahead of time and tell the writer what you think are the most important experiences to have. “Don’t just give me a hashtag to use on my trip,” says Murphy. Give thoughtful recommendations to writers and photographers like you would to any guest.

And with that, another hour of four-minute pitches commenced, finishing a dense session where the seeds for many future travel stories were sown.