UNWTO and the Indonesian Ministry of Culture and Tourism (MoCT) have launched a new energy efficiency project in Indonesia. The project, “Sustainable Tourism through Energy Efficiency with Adaptation and Mitigation Measures in Pangandaran” (STREAM), aims to serve as a model of innovative climate change mitigation and adaptation measures in tourism destinations in Indonesia and South-East Asia.

The project will implement climate change mitigation and adaptation measures in Pangandaran – a popular tourism destination in Java, Indonesia – adopting an energy efficiency approach, while strengthening local structures for the long-term success of the destination. Measures include seminars and workshops to increase the knowledge and capacity of local tourism stakeholders; applying energy efficiency and renewable energy technologies in hotels and public buildings; low-carbon tourism planning tools; and adaptation measures such as the rehabilitation of mangroves and coral reefs which naturally capture and store carbon emissions.

As such, the project will significantly increase the climate change resilience of Pangandaran and the competitiveness of its tourism sector, thereby serving as a model for other destinations in Indonesia and South-East Asia.

“This project is a clear example that the tourism sector is taking its responsibility to contribute to the reduction of global greenhouse gases emission and climate change adaptation seriously”, said UNWTO Secretary-General, Taleb Rifai. 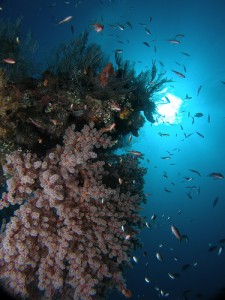 The Indonesian Minister of Culture and Tourism, Jero Wacik, stressed the importance of local initiatives as a step towards national policy on climate change mitigation, adaptation and tourism development. “We are happy to cooperate with UNWTO in this project as its activities represent strategic development steps for Indonesia and its tourism sector, in line with our four-pronged strategy – pro-growth, pro-job, pro-poor, and pro-environment”, he said.

The “Sustainable Tourism through Energy Efficiency with Adaptation and Mitigation Measures in Pangandaran” project is part of the International Climate Initiative of the German Ministry of Environment, Nature Conservation and Nuclear Safety.

The official presentation was held in Jakarta, Indonesia, at an event attended by the UNWTO Secretary-General, the Indonesian Minister of Culture and Tourism, representatives from other Ministries, representatives from the West Java province and the Ciamis district, and tourism associations. The event coincided with the presence in Jakarta of the UNWTO Secretary-General to participate in the World Economic Forum on East Asia 2011.