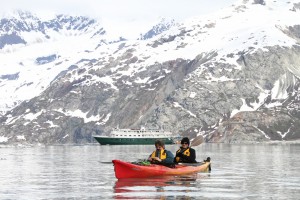 The Seattle-based company began business as American Safari Cruises with one yacht in 1996 before changing its name to Un-Cruise Adventures in 2013 after significant growth. Over the course of five years beginning in 2009, the company expanded its fleet from three yachts carrying 12-36 guests to eight ships carrying 22-88 guests and doubled its destinations from four to eight.

“I attribute much of our success to the passion for adventure shared among staff and leaders here,” said Captain Dan Blanchard, CEO. “Recognizing the dramatic upswing in adventure travel’s popularity over the last two decades, we maximize the potential of small ships to get close to wildlife, wilderness and authentic cultures.

To celebrate its 20th anniversary, the company is rolling out a number of new perks and offers:

Un-Cruise Adventures offers weeklong adventure cruises in remote and scenic areas, with few if any port calls, and a focus on outdoor activities such as kayaking, hiking, snorkeling, paddle boarding, skiff explorations, seeking out wildlife and whale watching. Expedition guides provide interpretation along the way.  One ship in the fleet sails river cruises on the Columbia and Snake Rivers with a focus on history and wine.