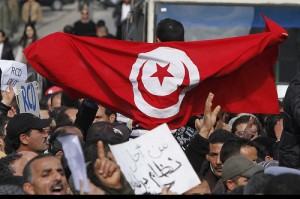 Reuters reports that street violence has continued in Tunisia after autocratic leader Zine al-Abedine Ben Ali fled the country on January 14th after a 23 year rule amidst violent protests over poverty and police brutality. A total of 219 people were killed and  Meanwhile the country announced on February 1st that 34 key senior security officials from Ben Ali’s regime have been replaced, including the heads of national, general security and presidential security.