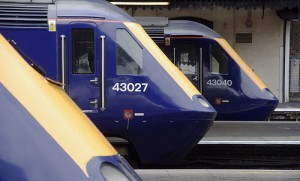 There has been much ado about rail travel in the trade industry lately. With bad press about air travel becoming the norm due to rising fuel and service fees, poor customer experiences, lost luggage, overcrowding, security issues, and the fragility of the air system in dealing with disasters such as the Icelandic volcano eruption or massive regional strikes.

The question is whether rail travel can provide a real alternative to flights on a global level, and what it needs to offer consumers for them to make the switch – and according to some, why the travel industry isn’t paying enough attention.

Will the customers ride instead of fly?

SilverRail Technologies, which claims to be  the world’s first global rail ticket technology platform, released a study of global travelers that shows a whopping 86% of respondents agree that ‘Ease of Trip’ is more important than the travel time – interesting news in era plagued by air travel frustrations.

The poll concluded that the three most important factors in consumer travel booking are time, cost and comfort – areas that airlines are consistently getting low marks on.

For more details on this study, read the SilverRail press release

Meanwhile, a recent Travelmole article by Valere Tjolle posits that consumers are already getting behind this “traincation vs. planecation” transition, much for the same reasons:

“Over half of all holidaymakers are considering swapping air travel for train travel,” reported Global Cool – a green lifestyle organization – last year and this is now becoming the new reality. “Much of this movement is borne from evident benefits of train travel such as flexible routes with quick and easy check-in, no lengthy journeys into city centres from out of town airports and a more comfortable experience.”

If plans come to fruition, it will be possible to travel throughout Europe and Asia by point-to-point high speed train more quickly, easily and comfortably than by air.

Tjolle indicates that with the slew on new high-speed train carriers are coming new online booking systems such as Quno, and a new breed of tour operators such as www.seat61.com and www.Greentraveller.co.uk. Greentraveller, which only books trips that can be taken by train or ferry, reports 2011 unique visitor numbers to their site at an increase of over 250% in the first quarter of this year compared with 2010. Richard Hammond of Greentravller told Travelmole:

“I believe this increase is driven by the desire for more people looking to travel by train instead of flying, especially for journeys of up to 7/8 hours from the UK. We hear time and time again from operators that customers are increasingly asking for rail options… Watch this space!”

What about the infrastructure? 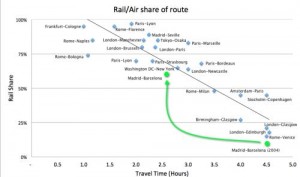 According to a recent Tnooz post by Kevin May, estimates of global capital investment in high-speed rail are around $200 billion, with Europe and Asia leading the charge. As rail lines are added and updated, journey times are falling dramatically – putting pressure on short haul air carriers.

May points out that the London to Paris leg, once one of the busiest air routes, dropped to less than 20% air travel after the Eurostar was completed. This left Barcelona to Madrid as the next in line with almost 1000 scheduled weekly flights in either direction; since the opening of a high-speed train in 2007, air travel is at less than 40%. And if that doesn’t have you convinced:

Companies such as Amadeus and Travelport on the GDS side, and SilverRail Technologies [TLabs Showcase], are putting either a large focus on or have built an entire business on European rail growth, and to a lesser extent on North American rail evolving to high-speed status.

Some other interesting points that May raises:

It is not just point-to-point (and return) journeys. Some believe the traditional European package holidays will be transformed when high-speed rail connects northern European cities with the warmer climes of the Mediterranean resorts – a change which will also effect dynamic packaging, multi-city trips and consumer protection issues. There is also the heady combination of rail+air combination fares (interlining and code shares) in the future.

For more information and analysis, please read the entire Tnooz article, How rail is evolving and why travel websites need to be ready