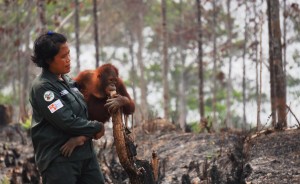 Khiri Reach and partner organisations such as Wow Borneo, Asia Transpacific Journeys and Khiri Travel Indonesia have united to draw attention to thousands of orangutans and other wildlife whose habitats are being destroyed by annual forest and peat fires in Kalimantan, Borneo.

Tens of thousand forest fires, many set by palm oil growers, have destroyed habitats. At their peak, August to October this year, the fires raised haze levels beyond acceptable limits to humans and animals. While the haze and burning has eased due to seasonal rains, the orangutans and other wildlife will remain threatened when the slash and burn starts again next year.

Even within national parks and forest reserves such as Sabangau, Tanjung Puting, and Katingan, hundreds of ‘hotspot’ fires this year impacted an estimated 10,000 orangutans and other species such as cloud leopard and hornbills, causing displacement, death and injury as well as massive habitat destruction.

“We want to mobilise the support of partner organisations, not just in Indonesia, but across the region to help the orangutan, preserve forest habitats, and encourage a halt to the burning of forests,” said Pharatah Senapan (or Kaew), Chief Ambassador for Khiri Reach. “A long-term sustainable solution is needed to ensure protection for the habitat of this unique species.”

Kaew said an alliance of travel related companies were now supporting the BOSF, which has saved dozens of orangutans, many of them emaciated, dehydrated and injured while fleeing the flames or inhaling smoke for weeks on end.

A BOSF spokesperson told Khiri Reach: “The foundation welcomes initiatives on orangutan and habitat conservation from partners. We are keen to fulfil the Orangutan National Action Plan – to put all orangutans in the rehabilitation centers back in the forest by 2015.”

Apart from a donation to BOSF, Khiri Reach has started an awareness campaign for staff and travel industry partners called, “Everyone Needs a Home.” It uses poignant visuals of orangutans trying to survive in burnt forest landscapes.

“We can’t standstill and not take part to help with the situation,” said Khiri Reach Indonesia spokesperson, Elske de Vries. “In fact, we believe everyone should join.”

In the meantime, members of the travel industry and the public can support the rescue work being done by BOSF by either donating funds online or adopting an orangutan at donation.orangutan.or.id. Click here for more information of the awareness campaign.