Written By: Jeff Bonaldi
Robert Swan will be a featured keynote speaker at Adventure Travel World Summit in Salta, Argentina, 16-19 October 2017, where he will deliver a keynote address. Register now to hear the captivating polar adventurer share stories from his experiences exploring the North and South Poles and learn more about the actions he is taking to combat climate change. Additional educational sessions will be announced in June.

In February 2018, Adventure Travel Trade Association (ATTA) member The Explorer’s Passage will join forces with the legendary polar explorer Robert Swan for a historic expedition to Antarctica called Climate Force: Antarctica 2018. Aligning their vision and passions, the adventure travel company and explorer have designed a mission that uses adventure as a vehicle to help preserve the history of planet Earth.

Each of The Explorer’s Passage’s adventures is unique in that they tell a story and provide clients with the opportunity to step back in time, following in the footsteps of history’s greatest explorers and luminaries. The company’s partnership with Swan, the first person to walk to both the North and South Poles, will focus on Earth’s story and will help equip leaders of all ages with resources and actionable solutions to become a part of a global force in the fight against climate change. 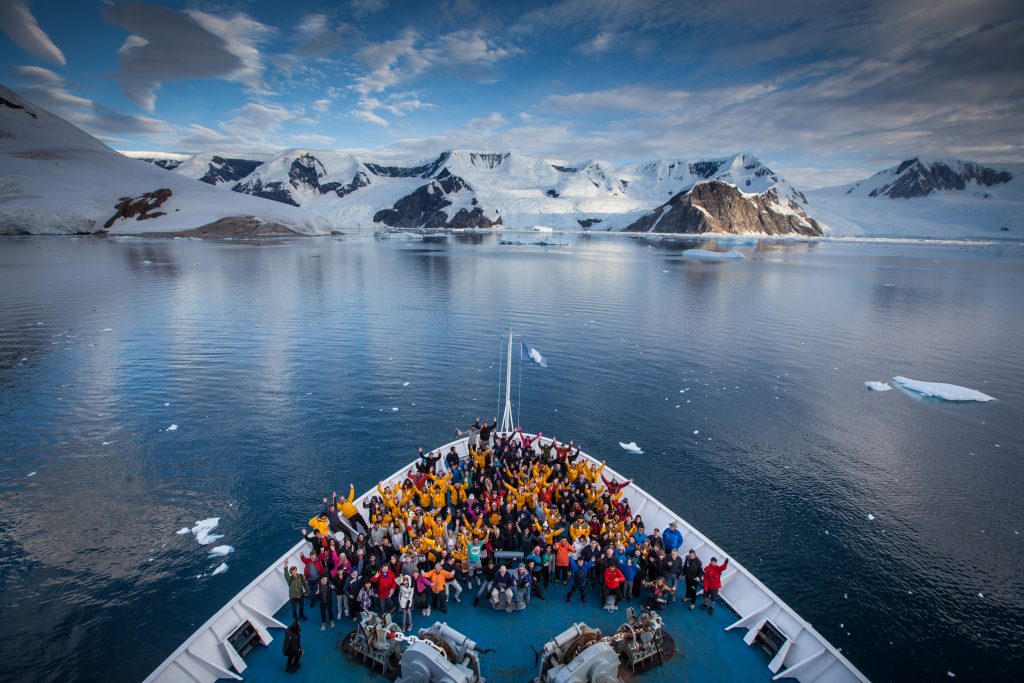 The Explorer’s Passage will offer an opportunity for travelers to combine adventure with education in Antarctica.

“In my travels across the globe, I have had the opportunity to witness the effects of climate change firsthand,” said Jeff Bonaldi, founder of The Explorer’s Passage. “It became clear to me that the next story we wanted to tell is the greatest one of all, that of planet Earth. The story of our planet has lasted billions of years, and the reality of climate change has the power to radically reshape our future. The need for massive action to combat this issue has never been more important. I cannot think of anyone better to help lead us in this fight than Robert Swan.”

The timing of this expedition is unique. In November 2017, Swan will make one last expedition to the South Pole with his son Barney on a mission known as the South Pole Energy Challenge (SPEC). This father-and-son team will ski on a 600-mile journey surviving solely on renewable energy, a first in polar exploration.

Using this expedition as a platform for engagement, they hope to challenge and inspire people to make measurable changes in how they use energy in their businesses, communities, and lifestyles. One month after their return, Swan’s organization, 2041 Foundation, will join forces with The Explorer’s Passage for Climate Force: Antarctica 2018.

Who is Robert Swan?

On November 3, 1984, Swan traveled 14,842 nautical miles (27,487 km) to Antarctica. He was inspired by the great Robert Falcon Scott, the British navy officer and explorer who, in 1912, led the second team to ever reach the South Pole. Swan’s incredible crossing of Antarctica — some 900 miles (1,400 km) — would be even more ambitious, and, on 11 January 1986, after 70 days, Swan’s team had achieved the longest unassisted march ever made in history. 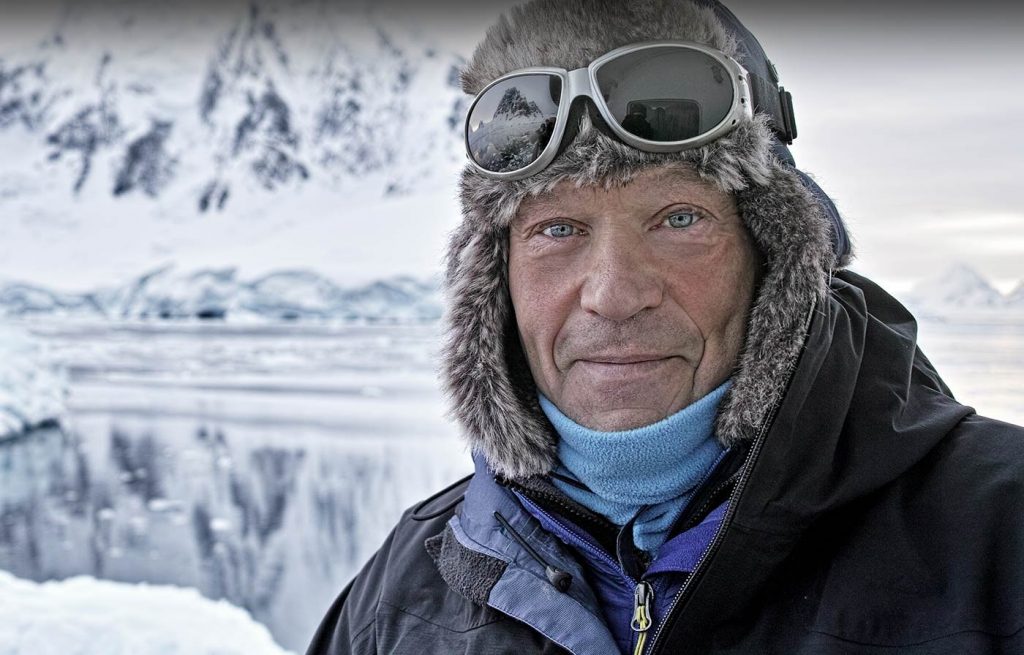 Robert Swan is the first person to walk to both the North and South Poles.

Three years later, on 14 May 1989, Swan and a team of seven explorers reached the North Pole, making Swan the first man to walk to both the North and South Poles. He was awarded the Polar Medal by Her Majesty Queen Elizabeth II and is a United Nations Goodwill Ambassador for Youth.

The experiences at the poles allowed Robert to witness the effects of climate change for himself, and 26 years ago, the ocean explorer Jacques Cousteau gave Swan a 50-year mission to help save Antarctica from the realities of climate change. Cousteau urged Swan to engage young people in the issue and promote the use of renewable energy.

Since then, Swan has established the 2041 Foundation and dedicated his life to the preservation of Antarctica through the promotion of sustainability practices. Through 2041, Swan has traveled to all corners of the globe to inspire and build leaders to create a more sustainable world.

Antarctica is a symbol, frozen in time, that represents our united responsibility to steer humanity toward a more hopeful future. It is an unforgettable destination, and those who venture to this last wild continent return home with a fresh perspective about their place in the world.

“Antarctica has never known war, belongs to no nation, and is home to no tribe or indigenous race — Antarctica is owned by all of us. It is the most beautiful, untouched, and pristine location on the planet, and it is for these reasons that we must do everything we can to preserve it,” said Swan. “The key to this mission is it to promote the use of renewable energy across the globe. If we can do this effectively, then it won’t make financial sense for the world to exploit it.”

Over the last 15 years, Swan and the 2041 leadership team have guided more than 3,500 people to the shores of Antarctica on their renowned International Antarctic Expeditions (IAE). Through 2041’s partnership with The Explorer’s Passage, which operates adventures on six continents, clients will experience an integration of history and adventure like never before. As part of the Climate Force: Antarctica 2018 expedition, guests join thousands of 2041/TEP alumni in more than 100 countries, giving them ongoing access to a diverse set of ideas, resources, and connections to become champions for a more sustainable future. 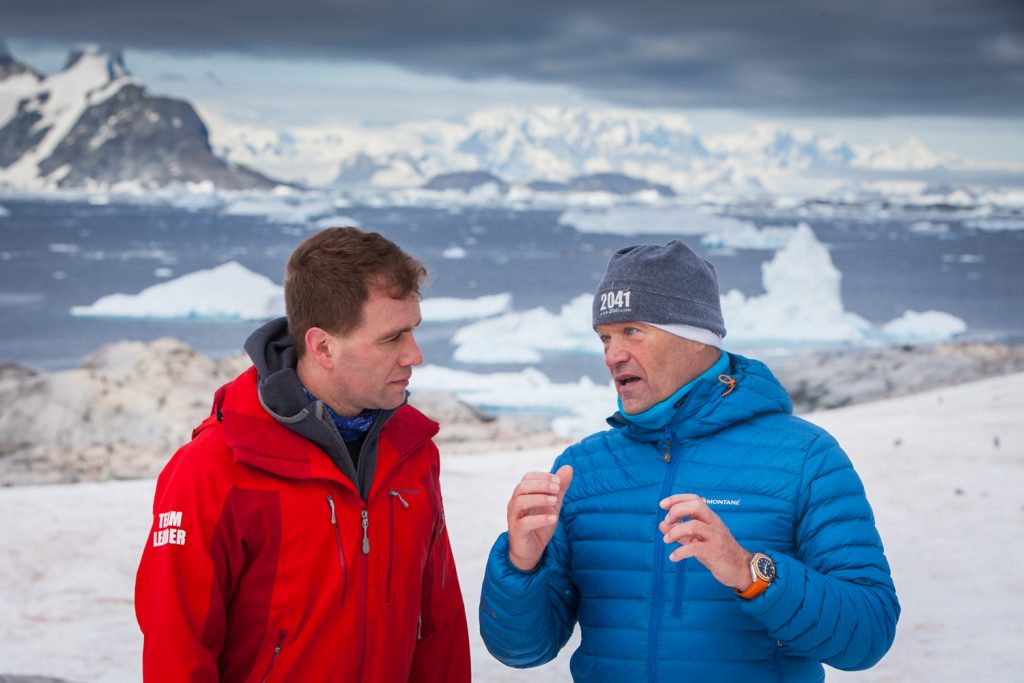 Guests on the Climate Force: Antarctica 2018 expedition will be empowered to educate others about climate change.

“Our renowned Leadership on the Edge program consists of a unique blend of leadership development, up-to-date climate change information, and sustainability education. Our seasoned team will help guide you on the adventure of a lifetime,” Swan said. “It is my belief that, if we bring together unique people from around the world to Antarctica and they complete the program and get the skills to return home to make their dreams a reality, that it is the best shot that we can give of protecting our last great wilderness here on Earth.”

The expedition will incorporate workshops on storytelling, writing, presentation, and public speaking to help guide guests on their leadership journey. 2041 alumni who have completed the program have used the training as a catalyst to enhance their personal and professional development.

For the Climate Force: Antarctica 2018 expedition, The Explorer’s Passage and 2041 will work hard to minimize their impact in Antarctica so they can help preserve it for generations to come. Consistent with their mission’s philosophy, they will also pay special attention to their carbon footprint.

“We will be offsetting the carbon impact of each guest on the ship portion of this expedition and will provide the opportunity for each of our guests to partner with us in the endeavor,” Bonaldi said.