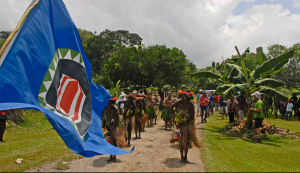 In October last year a group of expeditioners were among the first outsiders for almost 20 years to look into what can only be called the biggest man-made hole in the world.

Passengers and guides from the expedition vessel, The Spirit of Enderby, were granted special dispensation to visit the infamous Panguna Copper Mine near Arawa in the Autonomous Region of Bougainville, Papua New Guinea. The catalyst for the Bougainville Crisis of the 1980 and 90s, and the backdrop to Lloyd Jones’s acclaimed novel, Mr Pip, Panguna is the largest open cast mine in the world. Due to the Bougainville Crisis that raged there for 10 years and the subsequent blockade imposed by the Papua New Guinea government, few outsiders have visited the island until recently.

The Bougainville stop off was organized by Heritage Expeditions as part of a two-week journey of discovery through Melanesia. Heritage Expeditions, a Christchurch-based expedition cruising company, specialises in taking small groups of intrepid travelers off the beaten tourist track to unspoilt regions such as the Subantarctic and Russia’s Far East and as well Melanesia and the Pacific.

With a focus on conservation, Heritage Expeditions also facilitates enriching cultural exchange with the people of the places it visits. The Melanesian Discoverer trip was no exception and there were plenty of opportunities to witness spectacular cultural performances as well as to chat with the locals.

The Bougainville adventure started at the beautiful beach at Arawa where the group was met by a convoy of vans, driven by friendly and expert guides, many of whom were former rebels in the Bougainville Revolutionary Army. The drive to the mine was an adventure in itself. Situated 3000 feet above sea level at the end of steep and windy road through rainforest, the abandoned Panguna copper mine is a truly amazing but tragic sight.

Formerly pristine rainforest that was home to several endemic species, including the iconic flying fox, has been replaced by an enormous crater filled with rusting machinery. The Jaba River that was once the lifeblood of the local people is now so polluted there is no fish life and the water causes ulcers when it comes into contact with human skin. The flying foxes are now extinct, and with their fishing and hunting grounds destroyed, the local people make a meagre living panning for gold, which they sell cheaply to overseas buyers.

After the sobering visit to the mine, the visitors were formally welcome to Arawa by a large  group of dancers, singers, and musicians playing extraordinary pan flutes some reaching over five feet in height. A tour of the newly opened Mr Pip Library, funded by Lloyd Jones and located in the grounds of the high school, was another highlight, as were the beautiful baskets and carvings for sale.

The environmental damage the mining operation caused cannot be overstated. But in a strange way, the devastating conflict and blockade that ensued protected the island from development. With the right efforts Bougainville has the potential to become a dramatic destination for travellers wanting to experience the island’s beauty first hand. The rainforested mountains and smouldering volcanoes watch over pristine beaches. The town of Arawa, formerly the provincial capital and largely destroyed during the conflict, is rebuilding itself. Hope is in the air.

The Heritage Expeditions team is looking forward to returning to Bougainville in October this year on the 14 day Melanesia Discoverer expedition exploring the islands of Papua New Guinea and the Solomon Islands.