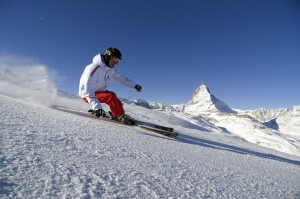 Last week, 32 inches of fresh snow in the Swiss Alps. Thanks to these favorable conditions nine ski regions already opened – marking the earliest season start ever!

Among these nine resorts is Zermatt, which was just named “Best Ski Resort” in the Alps for the second time. It received high rates for slope quality, atmosphere, comfort and exclusivity, as well as accommodation and slope safety. Three other Swiss resorts made it into the Top Ten: Saas-Fee (5), Adelboden-Lenk (7) and the Aletsch Arena (9).

But there is more to Swiss Winter than skiing. Switzerland Tourism’s new winter campaign and its commercial’s leading character Bruno highlight the unrivalled variety of facilities and activities Switzerland’s glorious natural landscapes offer. As the “Home of Snow Sports” it caters to adrenaline seekers as well as to people who like to take it a little slower, just like Bruno. 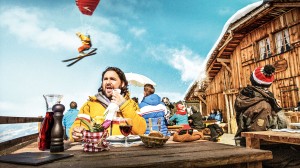 Another crew was exploring Switzerland on a quest for adrenaline: In its new movie, Warren Miller’s takes powder-hungry filmgoers “Here, There & Everywhere” – starting aboard the Glacier Express. The movie can be seen in American theaters until end of November.

Talking about November. That might be the time when most people start longing for warm weather. Recent arrival and overnight statistics show that Switzerland is a popular summer destination in the U.S. The number of nights Americans spent in Swiss hotels in the summer season of 2016 – from May through September – shows a growth of 4.9% compared to the same time frame in 2015. Since 2010, Switzerland has been able to report an increase in overnights from the U.S. every year.