Purpose of this paper

This paper looks at statistics for international visitors to Nepal and explores the extent of social media adoption by these people.  It also explores the role social media can play in influencing social media friends and contacts of trekkers to also consider trekking in Nepal.

The uptake of social media around the world has been extremely rapid and enormous.  Current estimates, as at July 2012, indicate there are over 1.5 billion users of the three main social media platforms:

The volume of communication between these social media users is also enormous with Facebook alone reporting 2.7 billion “Likes” and “Comments” added to user’s pages each day and over 250 million photographs added to pages each day.   More than 30 billion pieces of Facebook content are shared daily.  Twitter reports over 400 million “tweets” are posted per day.

Social media is now the dominant means of inter-friend communication in high social media usage countries.  These countries tend to be the leading developed economies of the world with the United States and European countries heading the list.

Who treks in Nepal?

International arrival statistics compiled by the Nepal Ministry of Culture, Tourism and Civil Aviation indicate just 13 countries, mostly from North America and Europe generated 218,000 visitors to the country in 2010.  The vast majority of these people were visiting the country for the purpose of trekking or holidaying.

On average, visitors from these countries stayed in Nepal for about two weeks.  Visitors from the United States stayed for an average of 10.26 days, the British 14.79 days and Australians averaged 18.45 days.  These 13 developed nations provided the majority of visitors undertaking multi-day adventure treks in Nepal.Other nations in the region, particularly India, Bangladesh and Sri Lanka also provided large numbers of visitors to Nepal, about 183,000 combined in 2010. However the vast majority visited for the purpose of pilgrimage rather than adventure trekking and mountaineering.It is very encouraging for the Nepal trekking industry to see visitor numbers from the main source countries has continued to trend upwards in recent years even through the global financial crisis and its aftermath. 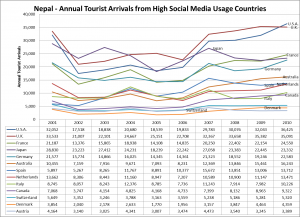 Which trekkers use social media?

Facebook provides good statistics on the number of its users by country.  Since most social media users have accounts with more than one platform these statistics can also provide a good indicator of the extent of adoption of the three main social media platforms – Facebook, Twitter and LinkedIn.

Using Facebook as an indicator of the degree social media adoption in the 13 countries generating the great majority of trekking visitors to Nepal, it is clear that adoption of social media is extremely high in these countries.  Together these countries have over 326 million Facebook users plus many additional people hold accounts with Twitter and LinkedIn.  The three platforms combined could have well over 400 million people subscribed to one, two or all three systems.  In countries such as the United States, the United Kingdom, Canada, Australia and Denmark the social media adoption rate exceeds 50% of the population.  In almost all cases the adoption rate exceeds one third of the population – and this encompasses every man, woman and child of any age in the statistic.

It is also instructive to know that social media usage is not confined to just the youthful age groups.  In the United States, as an example, there are very substantial numbers of Facebook users in their 40s, 50s and even older.  There are almost as many people in the United States in the 55-64 year segment with Facebook accounts as there are in the 13-17 year segment.

So, in answer to the question “which trekkers use social media?” it is likely that the great majority of trekkers from the 13 developed nations listed above will have accounts with Facebook, Twitter or LinkedIn, and often accounts with more than one of these platforms.

How many friends, followers and contacts do people have on social media?

It is very common for people in the 20-35 year age group in countries such as the United States, United Kingdom, Canada and Australia to have in excess of 1,000 friends connected to them on Facebook.  However, various analysts suggest the average number of social media contacts across all age segments is:

So, for a trekker in Nepal with accounts on all three platforms they may be expected to have over 200 social media connections they regularly share information with.  Even a trekker with just a Facebook account is likely to have 130 on-line friends they share their life experiences with.

How many Nepal trekkers might communicate with their social media friends?

As a very broad but conservative extrapolation, if 50% of Nepal’s 218,000 trekking visitors from the leading 13 countries have accounts with Facebook these people are connected to over 14 million social media friends just via Facebook.  There could also be an additional 3 million social media connections via Twitter and LinkedIn.

This estimate suggests these trekkers in Nepal could be connected via social media to about 17 million people, and potentially many more – the vast majority in the same age group as the trekker and most with similar economic capacity.

However, the real question is, “how many trekkers while in Nepal communicate with their social media friends and contacts?”  This is the key question when considering social media as a potential marketing tool for trekking and adventure experience operators in Nepal.  The real marketing power of social media comes from the immediacy of communication and sharing of experiences as they happen.

The problem for trekking operators is their highly social-media-connected clients from the United States, Australia, or where ever, essentially sever contact with their Facebook friends and Twitter followers the moment they arrive in Nepal and certainly the moment they commence their trek. They become “socially-invisible” to their connected friends as they stop posting to Facebook, stop tweeting and stop updating to LinkedIn. They have no choice.

Few trekkers travel with a laptop computer.  If they bring their smart-phone to Nepal it will either fail to operate on the local network or be extremely expensive to use due to global-roaming charges.  Once on the trekking trail they usually have few, if any, opportunities to even check their e-mail.

While a Facebook user back home in the United States might post updates and comments on their Facebook Wall once or twice a day – to be seen and shared by their hundreds of friends – they are unlikely to issue even a single post or update while in Nepal.  They have become “socially invisible”. Their friends back home no longer know where they are or what they are experiencing.  This is a serious marketing deficiency for Nepal trekking operators.

An operator might have 10 people on a trek with a combined total of over 1,500 social media friends back home on Facebook, Twitter and LinkedIn.  Indeed, it will be increasingly common that just one trekker alone will have this number of connected friends.  But while in Nepal the communications potential of these existing connections is just wasted and almost entirely unutilised.  In this era of social media dominance of inter-friend communications this is a serious lost marketing opportunity for any trek operator.

There is a diversity of answers to this question.  However, the key motivation is the human need for inclusivity, community, interaction with others and sense of position in society.  People are naturally “wired” to share their experiences with others.  Social media now vastly widens, speeds and enriches the ability of people to share and interact with others.  This is a human need that will never disappear. 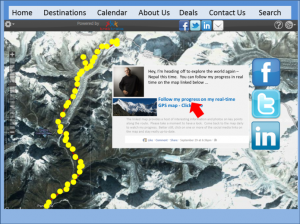 Trekking, particularly in Nepal, is full of amazing sights and experiences that people would love to share with their social media friends as they happen.   The TrekTraka social media update service allows trekkers to do just that.  TrekTraka can automatically issue multiple social media update posts directly to a trekker’s social media account over the course of a trek or tour.  These posts, and GPS tracking and mapping functions, let hundreds or thousands of social media friends engage with the amazing experiences of their friend trekking in Nepal – as they happen.  This delivers a power marketing benefit to the trek operator as is brings these social media contacts to the operator’s website again and again over the course of a trek or tour.  The normal human consequence of this is deep and repeated engagement is for some of these contacts to starting thinking “hey, I want to do that too”.  Learn more about TrekTraka at www.trektraka.com.