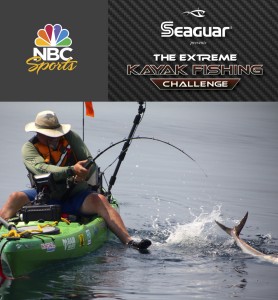 Heliconia, a leader in outdoors TV and WebTV production and distribution, is pleased to announce the launch of Season 3 of Seaguar’s Extreme Kayak Fishing Challenge on Wednesday, April 9th at 12:30 p.m. EST* on NBC Sports.

Now entering its 4th season of filming, Seaguar’s Extreme Kayak Fishing Challenge follows Jim Sammons on his journeys to exotic locations to catch the biggest game fish possible from his kayak. The first episode of the new season follows Jim and Luther Cifers of YakAttack to Rancho Leonero in the East Cape of Baja, where they target the ultimate kayak fishing game fish – marlin.

The Extreme Kayak Fishing Challenge with Jim Sammons, presented by Seaguar, will air weekly on NBC Sports during the second quarter, for a total of 13 showings. This season will feature top fishing destinations including; North Carolina, Puerto Rico, the Northwest Territories and Baja, Mexico. The footage will also be used for Jackson Kayak’s Kayak Fishing Show, which airs for four consecutive quarters in 2014 on The World Fishing Network.