Quark Expeditions®, the leader in polar adventures and pioneering expedition travel company operating exclusively in the Arctic and Antarctica, today announces its third successful landing this season to one of the world’s most isolated destinations: Snow Hill Island and its renowned emperor penguin colony. 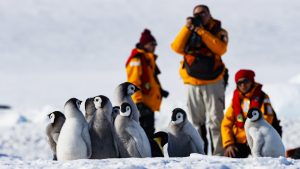 Located in Antarctica, this remote and invigoratingly beautiful destination is the reward of a daring voyage through icy waters that is both exhilarating and educational. There is always a risk traveling to this remote part of the world where extreme weather conditions are possible, including ice and natural phenomena such as volcanic eruptions. Quark Expeditions has successfully and safely transported the most adventure seeking passengers of any organization to this remote part of the world since its first successful landing at Snow Hill Island in 2004.

“While visiting the emperor penguin colony at Snow Hill Island is an incredibly complex and unpredictable journey, it is also one of the most rewarding,” said Andrew White, president at Quark Expeditions. “With decades of experience in the Arctic and Antarctica, our carefully curated expedition itineraries are designed with a detailed understanding of unique destination, like Snow Hill Island, so travelers can experience the adventure and splendor of polar travel at its finest.”

Further underscoring its reputation for excellence – which can also be attributed to having the most successful landings compared to attempts among rivals – this 14-day experience received AFAR’s Travelers’ Choice Award for “Most Unique Itinerary.” Additionally, BBC’s Frozen Planet has leveraged Quark Expedition’s expertise and status as the leader in polar adventures to transport film crews and capture rare footage of the emperor penguin colony.

All Quark Expedition experiences have a variety of key elements in common. These include landings, exotic wildlife sightings and massive amounts of pristine ice. Additionally, the expeditions to Snow Hill Island and the North Pole have helicopter sightseeing tours with all other itineraries featuring zodiac rides – enabling passengers truly intimate and memorable encounters with their surroundings and wildlife.