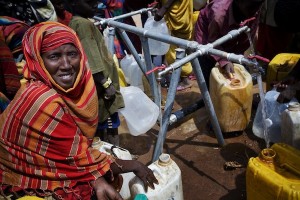 Toronto — Planeterra, an international non-profit organization, and leading adventure travel company Gap Adventures, appealed yesterday to the adventure travel community, and in just 6 hours realized their goal of $25,000 to help fund emergency drinking water stations in drought-stricken areas in East Africa. The humanitarian effort, which is managed by international non-profit CARE Canada, is continuing its appeal to the travel and business communities to help fund a second emergency water station in Kenya.

Donors everywhere can contribute directly to the relief effort online through links on Gap Adventures’ web site, and Planeterra’s web site. There is no minimum contribution amount.

“Give whatever is significant to you,” said Bruce Poon Tip, founder of Gap Adventures. “If 5,000 people donate just $5 each, we can reach our goal; but if you can afford more, every cent will be used towards this important cause, and the Canadian International Development Agency will match donations made by Canadians.

The severe drought in East Africa has created the region’s worst humanitarian crisis in a generation, with over 11 million people in need of assistance. Lack of water has spurred a mass migration of people from Ethiopia, Somalia, Djibouti and Kenya. Many of the refugees are headed for the Daadab Refugee camps — the largest refugee settlement in the world – where aid agencies are providing water, food, shelter and medical care.

“Sadly, thousands of people are dying of dehydration within days of reaching the camp,” he said. “In this case, hope is measured by the litre.”

“Gap Adventures and its traveler’s response has been overwhelming,” said Planeterra Director Megan Epler Wood. “Representatives at CARE Canada indicated that they have never seen anything like this!” Sixty-five percent of donations received have come from Canadian residents, with 27% of donations from people based in the U.S. Travelers from Gap Adventures’ global community in over 100 countries are also contributing.
In his personal message to the adventure travel community at 3:45 p.m. ET on Aug. 2 Poon Tip stated that these water stations provide refugees the water they need to complete their journey to safety.

“Sadly, thousands of people are dying of dehydration within days of reaching the camp,” he said. “In this case, hope is measured by the litre.”

As of 3:45 p.m. on Aug. 3, the CARE Canada web site showed that Planeterra/Gap Adventures relief effort has generated more than $35,000 in contributions.

Planeterra recently announced that it had established four social and environmental responsibility funds, including its Emergency Preparedness & Response, which is designed for emergency response to climate related and natural disasters in travel destinations where travelers and travel partners can donate effectively to help the area recover.

Donations exceeding these goals will be allocated to Planeterra’s Emergency Preparedness & Response Fund, and distributed according to urgent needs and in ways that will help prevent the need for emergency aid in future.
Contributions for this emergency relief effort have also come from people in dozens of countries around the world, including: Australia, United Kingdom, Costa Rica, Denmark, Estonia, Finland, Greece, Germany, Hong Kong, Ireland, Mexico, Netherlands, New Zealand, Norway, Switzerland and Taiwan.